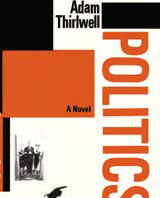 A great book deserves a great cover. Over the years, designing book jackets has attracted some of the world’s most accomplished designers. And it’s easy to see why: creating imagery and typography to partner great literature is an exciting proposition. Of course, there’s more money to be made designing the packaging for fish fingers, but book cover design is still a dignified and worthwhile activity for designers.

Today, the marketing wizardry that goes into fish finger packaging is also applied to book packaging. The sharp-shooters have colonised the once gentlemanly world of publishing, and dragged it into the fmcg era. They’ve introduced the airport blockbuster, TV-chef cookbooks and an entire literary sub-genre centred on the confessions of celebs, footballers, soap stars and ex-TV weather girls. They also have an attachment to foil-block lettering and punch-your-lights-out graphics. But for the most part, book covers remain an area of intelligent and sensitive design. In fact, it’s hard to find truly awful design in a book shop. Odd, therefore, that when many well-designed UK books are published abroad their jackets are redesigned. Why is this?

Suzanne Dean, creative director of international publisher Random House, explains: ‘It really comes down to the publishers of foreign editions. They might take a UK cover design because it will work in their country, or because it already exists as artwork and the author has approved it. But generally they publish their editions aimed at their marketplace, and if that means redesigning the covers, then they do it.’

You expect covers to be altered to accommodate language changes, but you’d have thought that in this time of global branding there would be one jacket for all editions. It works for perfume, so why not books? But books are culturally sensitive things: imagery that might have a subtle resonance in one country can appear meaningless gunk in another; the one-size-fits-all approach, common in global design, just doesn’t seem to wash when it comes to book covers.

Studying the ways that different countries change book jackets provides a unique insight into the way design reflects national characteristics. Take Dean’s elegant jacket for the UK hardback of Adam Thirlwell’s Politics. This mildly notorious first novel was published to the accompaniment of critical fireworks and the sound of reviewers overheating in reaction to its heavy sexual content. But in her cover design, Dean avoided salacious imagery; after all, it was a serious literary novel, even if it did offer meditations on, among other things, Hitler’s sexual fetishes, premature ejaculation and mÃ©nage Ã  trois. ‘The cover was designed,’ Dean notes, ‘in a Bauhaus style due to the Bauhaus references in the book. The author was very keen on that approach. In fact, he suggested it. He also supplied the graphic hand which I added to the design’.

The effect is not as atmospheric as Dean’s original cover, but not exactly bad either. Nor is this the first example of Dean’s cover designs failing to win approval in the US. Her paperback cover for Mark Haddon’s The Curious Incident of the Dog in the Night-Time was ‘a success’ in the UK. The book, about an autistic child, was a Whitbread Book of the Year-winner and a bona fide bestseller. Dean’s witty cover captures the enchantment of Haddon’s unusual tale, but her design horrified the US publisher. ‘If we put this out, we’d sell three copies,’ they said. The US cover has an austere design which reveals little about the story, a graphic of an upturned dog the only concession to the book’s central motif.

The author Jonathan Safran Foer, whose book Everything is Illuminated is widely viewed as a classic of contemporary holocaust literature, has ventured forth on the peculiarity of book cover design. In an article in literary magazine Zembla, he notes that the distinctive hand-drawn cover for his book designed by Jon Gray (who works under the moniker Gray 318) is the ‘best jacket ever’. He goes on, ‘In addition to being impossibly flashy and elegant, childlike and grave, simple and absolutely unique, it gets at the heart of the book.’ And Safran Foer’s foreign publishers seem to agree. Unusually, the design has been used extensively abroad. It has been changed slightly each time to accommodate translations of the title, but the hand-rendered typography in stark black and white has been retained nearly everywhere.

It is to publishers’ credit that they resist the cultural imperialism that says if it works in our country it must work in others. Reading literature is a deeply personal and intimate act, and buying a book often requires a higher degree of emotional engagement than is common in other purchases we make. After all, it’s not like buying a packet of fish fingers. Nothing wrong with fish fingers, but a book usually lasts longer, and sometimes, just sometimes, it becomes something that stays with you forever, physically and emotionally.