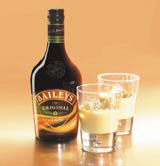 Though it was only established in 1974, Baileys Irish Cream is one of those brands that seems to have been around forever. Its old-fashioned taste – Irish whiskey blended with cream – is partly responsible for this impression, but so is its memorable packaging.

Earlier this month, however, new-look bottles designed by Landor Associates went on-shelf in Ireland, with plans for them to reach British shores by July. Gone are the slightly clunky bottle and embossed, interlocking B seal, replaced with a more curvaceous shape and an Attik-designed ‘Celtic swirl’, respectively.

The label has undergone even more dramatic changes. Its heavy, black Baileys ‘eyebrow’ has faded to bronze, and its profusion of lines and borders has softened into a more dynamic design. The cosy, pastoral scene has also been jettisoned in favour of a contemporary ‘flowing silks’ pattern.

The transformation has been overseen by Baileys’ global marketing director Donogh Lane. A slight, amiable Irishman from Tipperary, Lane casually imparts vast amounts of information – in a way that only someone who thoroughly knows his business can.

He had to learn fast. From the moment Lane joined Baileys, ’50 per cent’ of his time was consumed by the brand’s repackaging. Fortunately, he had a wealth of experience from which to draw.

Lane oversaw the pack redesign of cleaning products Mr Sheen and Windowlene while he was with Reckitt and Colman. And during his time with Guinness, he was instrumental in developing a brand – down to aspects of its design – for the Tanzanian lager market.

Lane says the significance of design in the drinks sector cannot be underestimated, particularly when it comes to packaging. ‘It’s crucially important, because so much in the drinks business [hinges on] the statement that you make to other people when you’re drinking a particular brand.

‘The bottle that you’re holding in your hand, the bottle that’s sitting on the table – it needs to be saying the right thing and reflecting what consumers are looking for in the brand,’ he explains. Moreover, the proximity of packaging to the ‘actual, physical product’ sends out strong signals about the product’s quality, he says.

‘You might see a piece of advertising and you mightn’t like it, and that’s just advertising. Whereas, the design, the packaging – it is what you’re buying. It has to give you confidence in what’s inside. If you think it looks cheap or feels frivolous or unsophisticated, then who’s to say you should believe that the product inside is well made or has a discerning taste?’

From a commercial perspective, Lane says the revamp aims to make Baileys more attractive to its 25- to 35-year-old, predominantly female consumers on ‘more occasions’. Already the number six spirits brand in the world, it currently enjoys annual sales growth of 10 per cent, with 6.7 million cases sold each year.

However, Lane says: ‘We’re looking to grow to 10 million [cases annually] in the next couple of years. The nature of business in [Baileys’ owner] Diageo is that, if there’s a brand growing at 10 per cent, we want it to grow at 20 per cent. It’s about accelerating the journey we’re on. Every piece of research we see tells us that Baileys is nowhere near the ceiling in terms of potential.’

Another key objective is to refresh the brand. Lane points out that people’s lifestyles have become increasingly informal since the mid-1970s, and the average consumer is now more likely to drink Baileys in a relaxed group setting than he or she is ‘after formal, five-course meals or in front of the fireplace in winter’.

‘If that’s where consumers are going, then that’s where we need to be as well,’ he says, adding that Baileys’ packaging has not ‘fundamentally changed’ in 30 years.

Lane says it is equally important to distinguish Baileys, which is the brand leader, from ‘cheaper brands’ that are aping its packaging – and introducing greater uniformity worldwide.

‘We haven’t been hugely consistent in the past in how we’ve brought the brand to life,’ says Lane. ‘Sometimes you might find, from one country to the next, and even within a country, that there isn’t one strong, core look that is recognised by consumers.’

At nearly two years in the running, Lane admits that the repackaging and rebranding process has taken a ‘long time’. However, he says this is par for the course: ‘It’s always difficult with a large, global brand to make big changes to packaging, because it stands for a lot and is obviously doing something right,’ he says. ‘You don’t want to turn it entirely on it’s head an break the special relationship that people have with it.’

Besides, between Baileys’ 12-strong international client team and Landor’s equally diverse design team, proceedings were never likely to be speedy, he adds.

‘It just takes longer to come to a solution than it does with one group of homogenous people, all nodding sagely to each other when one of them opens his mouth. But, ultimately, you get to a far better place. That’s where I think we got to. We transcended our differences and acheived something that works everywhere. Great design has that quality,’ he maintains.