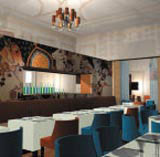 David D’Almada is creating interiors for Sir Michael Caine’s latest restaurant venture, an Indian eatery and bar concept set to open in London at the end of April.

D’Almada explains that the forthcoming venue will reflect Deya’s dual meaning. The word refers both to light and to the oil-filled containers that are lit during the festival of Diwali.

Interiors will boast a mix of original features and contemporary design. ‘We had to respect the ornamentation on the walls and the decorative ceiling, so the work we did stands alone in the room,’ says d’Almada.

The consultancy is also responsible for the restaurant’s corporate identity, which features a bespoke typographic marque. ‘The letter D in the restaurant’s name makes reference to the flame in the little containers,’ d’Almada explains.

Applications of the design work will include signage, stationery, menus, garments and press launch invitation.

Deya is Caine’s first foray into the restaurant industry since The Canteen closed in 2000. His partners are restaurateurs Claudio Pulze and Raj Sharma.

D’Almada won the work in December, on the basis of his relationship with Pulze and Sharma. D’Almada and designer Richard Saunders are creative leads on the project