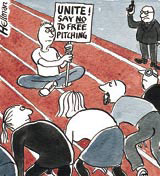 I’ve decided to build myself a house, but I’m not quite sure which brickie to get in. Tell you what, I’ll phone half a dozen, get them each to build a wall and then decide who’d be best for the job. Of course, I won’t pay them. After all, this is a great opportunity. There’s the chance of more work at the end of it, and they’d have the distinct privilege of working for me.

Two weeks later the test walls are up. Giving them a cursory prod, they’re all much of a muchness, so I’ll just go with the cheapest quote. There’s not much work left in the project anyway – between them they’ve already broken the back of it.

It’s usually builders who take the mick. But in this scenario, the client is the cynical Big Bad Wolf, blatantly taking advantage of his position in a buyers’ market. With something as hard and tangible as a brick wall, that’s obvious. But design is a more elusive creature, so clients are happier than they should be to make designers jump through hoops for nothing more than the sniff of a job.

Free pitching is an emotive subject, particularly for smaller design groups. It puts inordinate pressure on their resources, which are stretched at the best of times. Margins are tight, hours are long. The last thing one of these outfits needs is to waste their precious time working full pelt on a pitch they stand as much chance of winning as Tim Henman in a Wimbledon semi-final.

There’s nothing wrong with pitches per se, so long as they are conducted appropriately. And that means paying (a percentage of the overall budget, say) and treating the pitchees with the respect they deserve. After all, it’s the design consultancies that are putting themselves out, not the client.

Everyone on a pitch list should have a fair chance of winning the project, which means restricting it to two or three parties. This could mean the client conducting a degree of research beforehand, but that’s no bad thing. It means it’s clearer in what it wants from the whole exercise, and clearer about the kind of design company that can help it achieve its aims.

But even for a one-off annual report, it’s becoming increasingly common for six or so design companies to be competing on a no-payment basis. Wembley London (DW 25 March) asked 15 groups to pitch for its identity programme. What’s that then, a full team plus four reserves? Ultimately, it’s self-defeating; you’re not going to receive a well researched, well conceived proposal from someone who knows that at best they only have a 15-1 chance of winning the work.

Telling design companies that they need only supply roughs or sketches totally misses the point. There’s something deep, deep down in a designer’s psyche which dictates that a messy doodle on an old beer mat won’t do – that even a scamp has to be well rendered and look beautiful. More than that, it fails to recognise that ideas are the real currency of good design, and asking people to produce them for nothing seriously devalues their worth.

For design consultancies that are brave enough, the answer, of course, is to let it be known that you won’t participate in free pitches under any circumstances. Oddly, people who tend to take this stance come from opposite ends of the spectrum; larger consultancies whose reputation and stature is so secure that they can call the shots, or spiky, headstrong one-or-two person bands that are still young enough to have principles.

But in the middle ground, joining a pitch list of well respected peers is an almost unbearable temptation. It makes you feel dirty, but you’ve got to do it. You’re immediately put on the same level as others whose work you admire. And you have enough arrogance (or is that self-belief?) to think that you might just be able to pull it off this time. My God, wouldn’t that feel good? So you somehow forget the empty feeling of losing out after long nights of adrenaline-fuelled labour.

Recently, I heard a story about six small-but-hot consultancies that found out they were on the same free pitch list. So they hooked up and submitted exactly the same proposal on their own company letter-headed paper. It was an effective way of making a point, subverting the whole rather dubious process. It showed the kind of principled solidarity that the industry needs if we’re one day to see the back of free pitching.

So, as the cast of Grange Hill once said, next time you’re tempted, just say no.