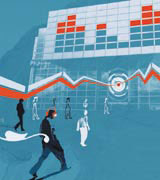 You wouldn’t immediately put Liz Cope and Sara Hale together with Andreas Neumann. The two former Orange senior brand managers are experts in strategy, marketing and branding – smart, commercially-aware and grounded. Neumann, on the other hand, is a chain-smoking, street-savvy, German-born pop music producer with designer hair, a passion for gadgets and connections with everyone from The Neptunes and Lenny Kravitz to Mica Paris.

But the trio’s starkly contrasting backgrounds are certainly compatible for their joint venture, Grasshopper Music. It is a ‘sound design’ consultancy, aiming to work with corporate clients to inject some noise into their currently silent brands.

Clients are gradually becoming aware that audio is an important side to their brands, says Cope, who left Orange as head of brand last March, as it helps increase recognition and engage staff and consumers. It could even be argued that a ‘sonic identity’ – think of Direct Line’s jaunty fanfare mnemonic – is more memorable than a visual logo. Grasshopper took on Orange as its first client last July to put better music into its stores, and is currently in talks with Lego, H&M, Cannon, Volkswagen and Alfa Romeo, among others.

When Hale started cold-calling clients last autumn, marketing directors would often say they knew they should be doing something with sound design, but hadn’t got round to it. Perhaps it’s because an audio brand can take so many forms: TV and radio advertising, on-line sounds, an in-flight telephone hold, lift and in-store music, mobile ringtones, exhibitions, events and films. So if sound has been commissioned by a client for its brand at all, says Cope, it is usually from different departments rather than one centralised team. ‘It helps to find a champion within the client, often in marketing or, if applicable, retail.’

‘After tone of voice, sound is the next big thing,’ she adds. ‘It must be embedded in a brand and strategically thought-out.’ In other words, every single sound must have a logical, commercial reason for being there. This is where Neumann, as composer and producer, comes in.

Once brand owners have developed ideas for their corporate sound with Grasshopper, Neumann works with artists to put together tracks of different sounds to build up a complete identity. ‘Once it’s composed, individual strands of the identity can be extracted and used across different media. A beep out of the context of the entire identity, for example, can become a ringtone,’ he says.

Composing original music for a brand is preferable to hijacking existing tunes – it won’t have associations in people’s minds. If a brand uses, say, a contemporary pop song to advertise on TV, chances are a potential customer was dumped to it or, worse, another company has got there first.

More importantly, new music can feature a layered texture of sounds, each with its own branded message. If a brand wants to imply that it has strong environmental or social credentials, its sonic identity could sample rainforest noises or perhaps a gospel choir.

But what’s in it for Neumann’s music industry collaborators? Aren’t they selling out by working with big corporations? ‘Not at all,’ says Neumann. ‘Artists see corporate music branding as intriguing. They are often bored, this is a new challenge, and it’s good money for them too.’

Music is not always original, but it does need to be suited to the environment where it will be heard. Grasshopper has created playlists for Orange’s high street stores which stipulate not only on which floor certain tracks should be played and at what time of day, but also in which store. ‘A high street store needs more urban music compared to an outlet in a shopping mall,’ says Neumann. ‘And in the north [of England], they like a bit more rock.’

Grasshopper aims to measure the success, or otherwise, of its work in the same way that commercial radio measures its playlists – with market research that plays short ‘hooks’ of tunes to see how recognised they are. Unlike radio, however, it will weave brand questions into the research. This process helps the Grasshopper team to sell its work to clients, who love to see hard data.

At MetaDesign in Berlin, sound design is not a new concept. Under head of corporate sound Carl-Frank Westermann, it has developed sonic identities for several clients, including its recent work for Siemens. Its ‘sound’ is being implemented this month, and the team is currently developing ringtones based on the identity.

‘We have created an entire “Klangraum” [soundscape] for Siemens which reflects the contrasting elements of its brand,’ says Westermann. Electrical ‘fizz’ noises represent the technological aspect of the brand, while street and traffic sounds stand for Siemens’ role as a modern communications business. The ringtones are ‘an additional application [of Siemens’] sound environment’, he notes.

Siemens’ short identifying ‘riff’ or sonic identity is a four-note marque built around a rising scale and ending on a positive ‘up’, while its strong, syncopated rhythm further identifies it. ‘Consumers are visually aware, but at present they only really notice the sound of a brand when it’s either loud or bad, or both,’ Westermann adds.

He agrees that non-original music can pose problems. ‘How do you decide whether drum and bass or a string quartet is more appropriate to your brand? If the music is original, you have more control and can be more creative,’ he says.

Where sonic logos now work best, says Dan Jackson, managing director of London-based Sonicbrand, is where they are sophisticated, global entities which lead a company’s entire strategy. ‘Take the McDonald’s “I’m Lovin’ It” riff. It’s more than a sonic logo, it is part of an entire song by Justin Timberlake and is used all over the world across hundreds of McDonald’s touchpoints,’ he says.

And even though sonic branding may be a new concept to many companies, Jackson is seeing a demand for the next level of branding – the voice.

‘There is a trend away from the sonic logo. We were totally music-oriented, but are now getting more and more calls from clients to look at their voice branding,’ says Jackson. ‘It started with Orange, which wanted vocal guidelines for its handsets and advertising. It’s a case of mapping brand values on to voices,’ he explains.

The concept works for both recorded voices and educating ‘live’ people, such as those working in call centres, on using certain inflexions in their voices. ‘Call centres are where a company’s real business is done. They are a massive opportunity,’ adds Jackson.

Ever the composer, Neumann has taken this marriage of music and branding to its logical conclusion. He has released a single, Heart, with UK producers Amos and Rikard Berg, DJ Jeremy Healy and Mica Paris – collectively known as Seraphim Suite. The single takes the brand values of BMW as its inspiration, according to Neumann. The future of music may be brands, and the future of brands is almost certainly music.