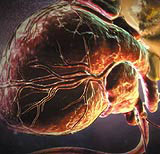 The Bristol arm of 422 has created sequences of computer-generated images for a three-part TV series, Animals – The Inside Story, co-produced by BBC and Discovery, which begins this week.

According to series producer Sarah Pitt, the programme aims to do for the animal kingdom what Body Story did for humans. The group’s computer graphics visualise how the inner workings of animals’ bodies affect their behaviour and responses to their living environments, she says.

‘The anatomical designs allow us to go further than we could take a camera and are based on the best natural historical knowledge and the latest research. The diversity of the animals featured was one of the main creative challenges,’ says Pitt.

A bright, contemporary styling was created for the content and neutral backgrounds emphasise shape, colour and texture.

The consultancy was appointed 18 months ago after a three-way pitch and 422 senior animator Andy Wheeler led a large creative team, including designers Kate Boulton and Lou MacDonnell.

The first programme, Fight for Life, airs on BBC2 at 9pm tomorrow.