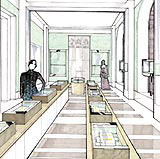 Garrard, the Royal jeweller since 1735, unveils its £1.75m flagship London outlet on 12 September, with interiors designed by Tom Bartlett of Waldo Works.

The Albermarle Street store is the latest example of the brand’s bid to contemporise its image under the creative direction of jewellery designer Jade Jagger.

The privately-owned Garrard – then Asprey & Garrard – was acquired in July 2000 by the investors behind the Tommy Hilfiger clothing marque. Former Louis Vuitton boss Gianluca Brozzetti was brought in as group chief executive in June 2001 to help reposition Garrard around a ‘classic avant-garde’ appeal. The brands demerged in April, with Asprey aiming to become a ‘luxury lifestyle house’.

The Garrard shop is ranged over two floors of an Edwardian building, originally built for the company in 1911. Bartlett’s designs introduce a sequence of contemporary experiences into this traditional space, which has been renovated by architect Karen Thatcher Associates.

The jewellery hall’s natural light will be augmented by fibre optic and cold cathode technology. A patterned marble floor contrasts with walls finished in celadon silk and white lacquer.

Leather seats, which are designed by Bill Amberg, feature in the ring hall, while the private sales area houses a champagne bar.

Bartlett says, ‘High-end jewellery, by its nature, isn’t mass market. The design is trying to create a theatrical experience, using expensive materials because it has to express something equivalent to what they’re selling.’

Bartlett was appointed in April last year without a pitch, having previously worked on residential projects for Jagger.