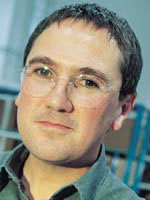 A few weeks ago Bill Verplank, a guru of the computer user interface world for his work inventing the mouse and the menu at the legendary Palo Alto Research Center in California, held an event at the British Museum. He was delighted to be in the UK, among the ancient stone and social hubbub of London, and the conference was great, with an inspirational talk by our own Bill Moggridge, who was making a rare visit back home.

It was good that such international luminaries could enjoy high-quality and well-designed surroundings and facilities such as the new British Museum. But any patriotic pride was quickly dashed when Verplank commented on his shock at the filth and dirt he experienced in walking around London.

It was shocking to hear his comments and see how a fresh view of a place you know well can point out things you just forget to notice. My first reaction was to argue that things aren’t that bad, and it’s part of what we love about London. But open your eyes and you can’t deny the flotsam and jetsam of tons of modern packaging and the visual pollution of plastered image and message, paid for or fly-posted.

At this time of year many will travel to other parts of the world and, on return, see their home nation as others see it. It’s a moment when you can see how a nation looks in the wider international context.

We often judge a nation’s strengths and weaknesses on some pretty vague and unsubstantial stereotypical images and historical myth. This year there have been some examples where those attitudes have been changed. The World Cup in Japan and Korea proved that two apparently unhappy neighbours could plan and deliver a fantastic global spectacle. The warmth of both Korean and Japanese people dispelled the tabloid stereotypes, and perceptions of English football fans were challenged by their exemplary behaviour. The World Cup also inspired through incredible architecture; the achievement of the Sapporo stadium with its air conditioning and movable pitch humbled our unsuccessful efforts to plan and build a national stadium.

Two years ago, the Sydney 2000 Olympic Games cemented Australia’s aspirations to prove itself as an innovative, creative, successful global player. Again, design was vital, in the stadiums and the infrastructure that a modern Olympics requires to be built.

One unsung design hero of Sydney 2000 was the Olympic torch. Sydney took the chance to say something about modern Australia when it was its turn to create a torch. A compact lightweight gas burner was designed into a sweeping aluminium form that created an object of great beauty. It was a clever use of design that said a lot about the values and abilities of a new Australia.

Looking at the new stadium, the wit and youthfulness of the opening ceremony with its Stomp-style drummers and dignitaries arriving in black cabs, and the arrival of the heart-pumping baton at the stadium, design was there in every moment. Design that is, in the grand statement and the detail, combining wit, aesthetics, functionality and emotion.

I declare an interest, in that the Design Council had a small part to play in helping Manchester develop the Queen’s Jubilee Baton. Designed by Ideo, the baton senses the heartbeat of each athlete as it is passed from runner to runner, and translates this into a pulse of bright light. It is a powerful representation of the technical innovation, emotional interface and pure beauty that our designers can achieve. May this be the signal we make to the world, overwhelmed as we are with the staggering historical context of the UK, that we can create both international spectacle and local regeneration.

But let’s take that achievement and get to work on those poor old streets, public transport systems, rural economies, seaside resorts and the other stuff we see so clearly when we return from our holidays.