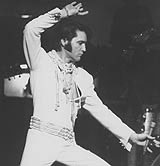 If, as has been claimed, Elvis never really died but is running a chippie in Salford, he will be mightily amused, not to say flattered, by The Elvis Treasures published by Carlton Books.

This very extravagant anniversary tribute to the so-called King of Rock ‘n’ Roll takes hagiography into new, uncharted territory. Not only is it lavishly illustrated and imaginatively designed, but it comes uniquely equipped with pull-out facsimile copies of love letters, recording contracts, playbills, posters, Christmas cards and admission tickets – the kind of memorabilia that, in its original form, would now be worth thousands of dollars.

The compilers of the book even managed to track down a school library ticket personally signed by the great man, and a High School concert programme in which his name is spelt wrongly (sic Guitarist – Elvis Prestly).

Perhaps this is not the book to buy if you are looking for an in-depth analysis of the Elvis Phenomenon, but it does afford a wonderful wallow in the myth.

We learn all about the young Elvis, singing hymns round an oil lamp at home with mom and pop, later getting into blues and gospel after they move to Memphis, Tennessee.

Ethnically his musical origins were far more black than white. He was, it seems, the missing link between black and white street music, hence his appeal right across the race and social divide. He was also, of course, the first rock ‘n’ roll sex symbol, which, given his partiality for agreeable young women, made for an exhausting private life.

Rowan Moore’s design for the Elvis Treasures cleverly combines a clean-cut, easy-to-read, picture-led approach with the almost childlike appeal of a pop-up book, full of visual stimulants and surprises. As you turn each page, you are never quite sure what tasty little morsel awaits you next.

Will it be EP’s social security card, the bill for his custom-made jewel-encrusted white jumpsuit ($2,300), or a bunch of telegrams from stunned and admiring peers after his unexpected death from heart failure on 16 August 1977?

There is also a CD containing clips from a number of radio interviews, and press conferences, given by Elvis between 1955 and 1972, including comments about the time he spent in the army.

Apart from The Beatles, it is hard to imagine such an elaborate and comprehensive honour being paid to any other singer or band, especially 25 years after their death. Any lessening of interest in Elvis is bound to be revived by the myriad anniversary events and tributes planned for this month.

The hardcore fans still troupe along to Graceland, his Memphis mansion, holding their candlelit vigils during Elvis Week each August. The story behind his unnecessarily premature death aged 42 is one of sadness, waste and self-destruction, but a book such as The Elvis Treasures is all about celebrating the myth, not examining the man.

The Elvis Treasures is published by Carlton Books on 1 September, priced £30. Elvis and Elvis Presley are registered trademarks of USPTO