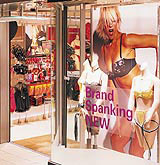 With its range of lingerie, toys, lotions and potions, sold via retail outlets or notorious all-girl ‘parties’, Ann Summers brought sex to the highstreets and living rooms of Britain in the late 1970s and 1980s. However in doing so the brand gained a reputation as the Les Dennis of erotica: popular, but a bit tacky, not something you’d really own up to wearing.

Over the past 18 months marketing and brand development executive Rebecca Franklin has been masterminding a sexy wiggle out of the shackles of naffness into a spanking new brand position. Ann Summers new values are, she says, accessibility, edginess, modernity, fun, sexiness.

Franklin is the antithesis of the jumpy brand manager hiding behind industry jargon and double-speak, and her forthrightness, even of the brand’s shortcoming, communicates confidence rather than insecurity.

A background in marketing newspapers and magazines gives her a certain ease around journalists, and having worked on the launch of the attitude-laced, but ultimately doomed, women’s magazine So, she claims an intimate knowledge of what makes an Ann Summers customer.

‘We don’t pretend to be trendy with our product; that’s not what we’re about. Our customer is not going to go into Coco de Mer and spend £800 on a bra,’ she says. As for the Tom Dixon-designed sex toys for exclusive London store Myla: ‘They’re great, but he’s a man so how does he know what’s going to please a woman?’ she says quickly.

Franklin has a lot going on. Ann Summers’ store interiors, graphics and signage are currently being revamped, following last year’s new logo. In July, Ann Summers launched Uncut, designed by Creative Cake, a website that offers the more adventurous customer the chance to buy naughty with discretion. And its new-look catalogues are scheduled to be unveiled in September.

The first Spanish store opened a fortnight ago. And Franklin has just put in an order for a year’s worth of Ann Summers carrier bags, which, she explains passionately, will allow the customer to take the brand on to the pavements and buses of suburbia.

Not bad for a girl who dreamed of being a vet until she was asked to leave a work experience placement because she would burst into floods of tears whenever a beloved pet had to be put out of its misery.

She’s been much more ruthless with the Ann Summers brand. ‘If I’m honest, there wasn’t that much we wanted to save. We had to move forward.’ There is even a hint of a shudder as she remembers the ‘tomato soup red’ and ‘jade green’ of the old corporate colours.

With a gross annual turnover of £85.5m, and 65 stores nationwide, what prompted the change of direction? ‘Companies with no competitors become complacent, and a competitor can come in with an edgy new store and hey presto, they’ve got the market. We won’t allow that to happen,’ she explains.

She is fiercely supportive of her six-strong in-house design team, and is currently looking for a new head of design. She is vocal about design work she admires, such as recent rebranding work by Waitrose and Marks & Spencer. ‘M&S is doing lots of things well at the moment. It seems to have got itself out of a sticky situation by being brave with its design,’ she says.

Packaging is next on her agenda. ‘At the moment there is no consistency. I’m actually saying this very nicely,’ she grins, before opening the most recent catalogue. With 20 000 products, this will be quite a job. When asked if she is a regular purchaser she replies with a smile and a bit of Blair-esque equivocation. ‘If I said no that wouldn’t be very good would it? Yes, of course I do.’

With further ambitions to start licensing the Ann Summers brand to other products and a desire to see more in-store concessions, the future looks busy for Franklin.

Behind her informality, flowing skirt and glittery flip flops, her grip on the Ann Summers brand is as firm as one of the company’s party planners giving a living room product demonstration. She admits to shades of control freakery, but concludes, ‘We’re the only people that know our business.’