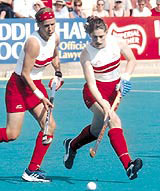 Vibrandt is considering how to capitalise on the brand opportunities generated by the success of Jane Smith, a member of its artwork department, who led England’s hockey team to silver at the Commonwealth Games. Smith has been known to appear in the office with a variety of broken limbs, but during the past two weeks it’s been worth all the pain. Only a controversial Indian goal, that snatched gold from the team’s fingertips, scuppered Smith’s full poster-girl potential. Beckham-like status will have to wait until the next Olympics.