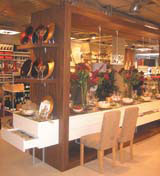 The 1115m2 Dunnes Home sets its sights on Dublin’s market of young, urban professionals and has at its heart an apartment set, housed on an elevated plinth.

This is indicative both of a room lay-out and a more traditional store design, according to CDG managing director David Worthington.

‘It is almost like an apartment, in the style of a loft, but, rather than using room sets like you would find in Ikea, we have tried to give a suggestion of a dining room, a bedroom or a bathroom,’ says Worthington.

‘It gives you an idea, without making you think, “I would love to live in that room” or “I can’t stand it,”‘ he explains.

In this respect, the store is pitched somewhere between the literal room-set lay-out of an Ikea and the department-based style of a House of Fraser, Worthington adds.

Dunnes Home will offer the retailer’s existing range of products, with the addition of new lines specifically selected for the target market. CDG’s design of open room sets and visual merchandising will increase cross-selling opportunities, according to the consultancy. CDG has also created the identity and in-store graphics for the store. It is the first time the group has worked with the Irish retailer, after being appointed in early summer, following a competitive pitch.

Dunnes claims to be Ireland’s largest retail group, employing 18 000 people. It has no immediate plans to extend the stand-alone Dunnes Home concept beyond the Dublin store, which opened last week.