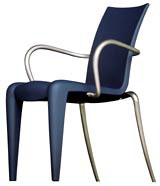 Maarten Van Severen was named Designer of the Year at the last Paris Salon De Meuble, the international furniture fair that took place last January. And with good reason.

This title is awarded annually to a contemporary designer or architect who has created work with exceptional aesthetic, and technical qualities. With illustrious predecessors such as Philippe Starck, Jean Nouvel, Christophe Pillet, Ron Arad, Ross Lovegrove and Alberto Meda, Van Severen became the 19th Designer of the Year since the introduction of this award in 1983. He is also the first Belgian designer to win the title. For Van Severen, this is yet another step in his rise to international fame that began only a few years ago. But why is this Belgian designer on everybody’s lips and what is his relevance to Belgian design in general?

Born 43 years ago as the son of an abstract painter, Van Severen grew up in a creative environment; his brother Fabiaan is also a talented furniture designer. While studying at the Saint Lucas institute in Ghent, Van Severen discovered the work of Le Corbusier, sparking an enduring admiration for the architectural and furniture work of the legendary architect. Eventually, Van Severen turned towards furniture design rather than architecture, although architectural influences remain visible in his work. He is also currently engaged in a high-profile collaboration with a star of Dutch architecture, Rem Koolhaas, both for private commissions and a series of Prada stores.

Van Severen started designing and producing furniture in the late 1980s in his workshop in Ghent. His first pieces of furniture were long, sleek tables in steel or wood. A few years later, he replaced steel with aluminium, which remains one of his favourite materials. He is a perfectionist, constantly refining designs for his tables and chairs in an effort to make them both stronger and lighter. Once the first prototype is bolted or welded together, he often begins an almost obsessive search for techniques that can make all the joints invisible.

For several years, Van Severen continued to manufacture and sell furniture from the workshop. But working as an artisan meant that his output was strictly limited.

By the mid 1990s, his work was receiving international acclaim and Van Severen signed his first important contract with Vitra. “I think we met in 1995,” remembers Vitra chairman, Rolf Fehlbaum. “I was impressed by the furniture collection Van Severen had designed and was producing in his own workshop. The interest was to see whether the incredible artisanal quality of his furniture could be translated into an equally perfect industrial production.” The answer was yes, and Van Severen went on to produce contemporary classics for the German/ Swiss manufacturer in the shape of the .03, .04 and MVS chairs.

In the design press, his preference for pure, sleek forms and invisible joints has meant that Van Severen’s name has often been associated with minimalism. On several occasions, however, he has made it clear that he is not happy with this classification. First of all, Van Severen is the kind of person who does not like other people trying to stick a label on him or his work. “I design only for myself,” said Van Severen recently at the Paris Furniture Fair, emphasizing that he will not give in to fashion or trends. If his designs look minimalistic, it is not because minimalism is fashionable.

Van Severen feels that the term “minimalism” tends to underestimate the efforts that go into the conception and realisation of his furniture. In a 1999 interview to Belgian monthly Meubihome, he said: “I consider myself to be a maximalist rather than a minimalist. If you knew just how much thought, research and technology went into my chair .03 for Vitra, you wouldn’t call it minimalistic. All this research and technology is invisible, but this does not mean it isn’t there. It is not just another plastic chair. It may appear to be a rigid plastic chair at first sight, but once you sit down, you feel that it is in fact flexible and comfortable.

“The material used is a type of polyurethane, called integral foam,” Van Severen explains. “There has been a lot of research into this material, mainly in the automobile industry. But it is only used as a surface material [in cars], as you would use leather. In my chair, on the contrary, the polyurethane is used together with a metal frame to form the chair’s structure and to give it the necessary comfort.”

His new Table A, with a tabletop in polyester and bakelite, is another experiment in perfectionism. “I did not want the legs at the corners of the table. When you stand close to the table, you do not notice the legs. The next challenge will be a table without legs, although I’m afraid this will remain just a dream,” he says.

Throughout his career, Van Severen has mainly worked with materials in their natural appearance, such as brushed aluminium or wood with a soap finish. Recently, he started experimenting with colours. The first exercise was the Blue Bench he designed for Edra, while at Cologne’s last furniture fair he showed Bookcase 92, an aluminium bookcase with colourful plastic doors. “Unlike aluminium or wood, the colour of these plastic doors is inherent to the material,” he explains.

But if you consider his background, it is evident that Van Severen is not really an industrial designer, but rather an artisan or even an artist. Fehlbaum calls him “a purist with a technical and an industrial attitude”, and many of his admirers underline the ascetic quality of his work. Last year, he confined part of his production of handmade furniture to Top Mouton, a Belgian company which specialises in bespoke and small batch furniture.

So there are two conflicting arguments for the influence of Van Severen and his work on Belgian furniture design. Considering his solitary production and his limited number of industrial projects, his influence on the development of Belgian design or the Belgian furniture industry has so far been rather limited. But on the other hand, his international reputation has led to a general awareness that there is such a thing as Belgian design.

Indeed, the design community in Belgium has a lot more to offer besides Van Severen. Artisanal furniture designers such as Maarten’s brother Fabiaan or Casimir are also gaining international recognition. In the industrial field, there are experienced and reputable designers such as Axel Enthoven, Paul Verhaert and Philippe Neerman. And there is more to come. A new, talented and highly motivated generation of young industrial designers is working its way up: Stefan SchÃ¶ning, JÃ¼rgen Oskamp, Dirk van Gogh, Roel Vandebeek, Wim Segers or Peter Van Riet, to name just a few.

The Belgian furniture industry is also going through something of a metamorphosis. Over the past few years, several furniture manufacturers have found their way on to the design scene, such as Anker Bedding, Aurora, Belgo Chrom, Beka, Bulo, Durlet, Extremis, Jongform, Jori, Juventa and Spijker.

It is as if there is an enormous creative potential in Belgium, lurking beneath the surface, waiting to explode. Van Severen’s ascent to superstardom was the spark needed to set it off. After Italian, Scandinavian and Dutch design, Belgian design could be the next national design phenomenon to really take off.