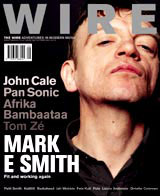 The final magazine I looked at was the Wire. This is a magazine for people who like to read about obscure music. I stress the word ‘read’; because unlike the other publications in this article, the Wire is bought to be read and not picture-surfed. It’s a magazine about achingly hip San Francisco DJ collectives, gourd beaters from Outer-Mongolia and the latest electronic wiz from Cologne.

I buy half a dozen magazines each month, but The Wire is the only one I rush out to buy. It’s my Smash Hits, Hello and TV Quick rolled into one: I can’t contemplate a month without it. So I have a strong interest in the new design by the brilliant Ekhorn Forss team.

Over the past few weeks, Kjell Ekhorn and Jon Forss, better known for their record sleeves for some of the more adventurous UK record labels, have been wrestling with the familiar problems of magazine design. As designers they hanker after the cool respite of white space, but The Wire is a magazine with an editorial policy committed to giving writers plenty of column inches and a readership hungry for the written word augmented, but not swamped, by sympathetic pictorial content.

Ekhorn Forss may not be a recognised magazine design group, but it has risen to the challenge of designing a text-led magazine without falling into the trap of making it too dry or too ‘horn-rimmed’. The group’s design, although still in draft form, has moved the magazine away from its academic jazz-zine heritage into something sleeker and more modern. The April 2001 issue will be the first to carry the new design and it remains to be seen if it will work, but I’m a big fan of Ekhorn Forss sleeve designs and my bet is that it will prove to be a brave and successful choice to redesign my favourite bedtime reading.