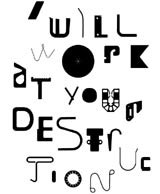 Addicted To Love, from 17 January until 14 February, is a mixed-media exhibition celebrating valentines.

Until 18 January Ships in Bottles features the recent paintings of Tony Turner, who is back on the London art scene after an absence of nearly 20 years.

Public Address System is an exhibition of posters reflecting the creative and expressive powers of typography. On until 14 February, the posters include works by Fernando GuitiÃ©rrez, Alan Fletcher and Paul Elliman (work pictured).

British textile artist Alice Kettle’s work will be on display from 18 January until 14 March during her exhibition entitled Mythscape.

Designer, architect and sculptor Thomas Heatherwick has been chosen by Sir Terence Conran to spend £30 000 on ‘ingenious inventions’ that are to be displayed at Thomas Heatherwick – Conran Foundation Collection from 17 January until 21 March.