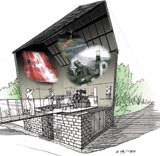 Bradford group RFA Designers is on the brink of implementing its plans for a science and technology-based exhibition centre, the Hope Pit Scheme, at the National Coal Mining Museum for England.

Pending a decision on Heritage Lottery Fund Stage 2 approval, which is expected next week, the consultancy will begin executing the conceptual designs it produced for the HLF submission. It is hoped the venue will open in Spring 2005.

According to RFA Designers’ creative director Richard Fowler, Hope Pit will move away from the ‘heritage and social history’ approach of the main museum. It will focus instead on the science and technology of coal mining and will be designed to support the Government’s emphasis on these subjects in the school curriculum.

According to Fowler, concepts include a ‘sensory science tour based on the original technology housed in the colliery buildings’.

Other planned educational features include an ‘interpretative trail’ around the natural reed bed water filtration programme, which treats polluted water from the mine, and a nature trail linking Hope Pit to the main museum.

RFA Designers was appointed in July 2003 after a three-way creative pitch.

The design and build contract is likely to be worth £500 000 to the consultancy. Dependent on funding, Aedas will undertake the architectural scheme to update the colliery buildings.

A £6.5m redevelopment of the museum and restoration of the Hope Pit buildings was completed in May 2002. The museum was also recently awarded a £1m European Union grant for its water-management scheme.