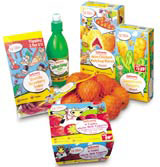 Design groups are being enlisted to persuade children to eat their greens, as the health of our youth comes under general scrutiny again.

But with the launch of Safeway’s children’s range last week, with packs designed by Butcher and Gundersen (DW 8 January), there is a renewed emphasis on the creation of child-focused aesthetics with responsibility.

The current House of Commons Health Select Committee on obesity has been critical of the way the packaging of unhealthy food products entices children and encourages ‘pester power’ against weary parents. Furthermore, according to the latest report from Datamonitor, up to 30 per cent of British five-to-nine-year-olds are overweight or obese and this is expected to rise to 36 per cent by 2008.

Butcher and Gundersen was appointed by Safeway in January 2003 to create its packaging, specifically aimed at four-to-ten-year-olds, as part of Safeway’s Healthier campaign, which launched this month.

Jacqui Sinnat, the consultancy’s creative director, says ‘the whole premise was to find a healthy way of getting children to eat’.

The consultancy’s research revealed how yellow is a key colour that appeals to children. With a brief to create the packaging for 70 products, from pizzas to fresh fruit, five cartoon characters were created to form part of the identity formula. All products have a yellow front panel created to display prominent nutritional information to parents and described as ‘fundamental’ to the overall design.

Specific photography and illustrations were added to provide attractive and appetising elements for the eye and encourage anticipation in the palette. The need to satisfy the concerns of the parent brought an additional challenge, as Sinnat explains the designers had to work on ‘both levels’.

McDonald’s, too, is facing younger and more demanding customers at the moment. Birmingham design group Boxer is currently ‘re-energising’ the Happy Meal identity as part of its contract to revamp the burger giant’s global packaging design (DW 18 December 2003).

Paul Castledine, creative director at Boxer, says that the Happy Meal design needs to address the challenges of producing ‘interactive packaging’ with ‘playability’ for children.

The burger giant is following the trend in current thinking on healthy options. He thinks packaging design needs to rise to the challenge. Castledine believes that: ‘Healthy food needs to be attractive. “Fun” is the key word when it comes to kids,’ he adds.

A cartoon-like or fun identity is usually crucial to the design experience for children. Safeway’s products such as Yummy Whole Milk Yoghurts are named and packaged to tear children away from the television.

However, Safeway’s children’s range remains unnamed for an important reason, as Sinnatt reveals. ‘We had to create an identifiable range for children that did not have a brand name, because that is another level of communication. Names are difficult and if you get it wrong, children will reject it,’ she says. Children are more comfortable with a visual level of brand interaction.

Sinnat describes the need to be ‘eye-catching, bright, fun and relevant’. By using the ‘values that children associate with desirable products,’ she says, designers can attract them to previously ‘difficult’ healthy foods, such as fruit. Placing a cartoon character on a bag of apples provides an ‘immediate language for children’ adds Sinnat. This is crucial when ‘an instant choice’ needs to be made by restless and fidgeting youngsters.

She believes that design must shoulder a degree of responsibility in the promotion of healthier diets. There is little room for ‘idealism’, she maintains, but design must still be ‘responsible’.

Castledine feels design could be more ‘upfront in promoting nutritional value’. The Food Standards Agency agrees: ‘If designers can give greater prominence to nutrition then that’s great.’ However, design’s responsibility in promoting healthy food can be difficult to define, given the need to respond directly to a client’s brief.

Meanwhile, a health time-bomb continues to tick in playgrounds across the country.