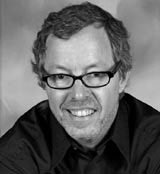 The group is a branding and packaging specialist and Leonhardt says he has been appointed to ‘sharpen the agency’s positioning’.