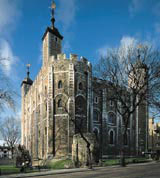 Historic Royal Palaces is planning to appoint a design group to create a series of permanent displays at the Tower of London.

The charitable trust, which manages five unoccupied royal palaces in London and Surrey, is in the midst of a three-way pitch for the work, following the appointment of The Holmes Wood Consultancy last month to design the Tower’s £150 000 temporary exhibition, Prisoners of the Tower.

Historic Royal Palaces deputy chief curator Sebastian Edwards would not confirm which groups are participating in the pitch for the permanent displays, but says that he plans to make an appoint- ment ‘within the next month’.

The £200 000 job will involve the creation of displays at four key Tower sites, including the Bloody Tower and the Tower Green. The permanent displays are expected to launch in September.

Meanwhile, Historic Royal Palaces is within five months of unveiling the results of its £11m Tower Hill scheme. According to the trust’s property advisor Bob Hill, the scheme is ‘converting what was a highway into an elegant, pedestrianised civic space’.

Stanton Williams is designing the site’s new-build welcome centre and retail space, and is also responsible for landscaping.

Managing director Alex Wood says the group’s brief is to develop the identity, 3D designs, graphics and all interpretational material for the temporary exhibition.

The raft of work at the Tower of London comes as the attraction seeks to build its European audience, following the collapse of the US tourist market to the UK.