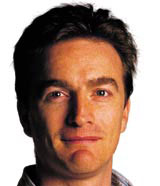 Landor Associates’ London office has further bolstered its European standing with the promotion of Tim Sarson to financial director of Landor Europe.

Make the most of your opportunities to find a job