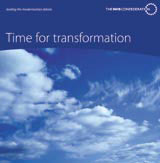 NHS Confederation is rolling out a healthier set of brand guidelines, following a review in conjunction with Spencer du Bois.

The rebrand aims to help clarify the organisation’s role and sharpen its voice in debates over health service policy.

NHS Confederation represents the interests of NHS trusts to Government, as well as keeping members abreast of issues ranging from GP contracts to plans for foundation hospitals.

But there is often confusion about its activities, with many members not identifying the information they receive as coming from the NHS Confederation, says Spencer du Bois partner Max du Bois.

‘Although MORI-commissioned research showed the information it provided was highly regarded, the poor quality of the NHS Confederation branding meant the organisation was not always getting the credit for its work,’ he adds.

According to du Bois, the brief was to ‘[recover] the brand’s light from under a bushel’, largely because it had been ‘outstripped’ by the variety of communication styles that du Bois says have grown ‘hand over fist’ in the past couple of years.

While the logo was ‘not to be touched’, says Spencer du Bois head of studio Claire Biscard, who led the design team, a ‘linking device across applications and the visual system’ is the primary output.

She adds, ‘The challenge was to create a branded look and feel for all the NHS Confederation’s materials that projected a single image without suffocating the individual value of the numerous initiatives, reports and views. After all, that’s what gives the brand its substance.’

The group won the work last January after a three-way pitch. Its guidelines are set to roll out across the organisation as well as to NHS Confederation’s roster of creative and marketing services groups.