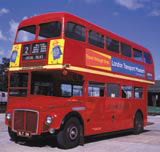 Londoners have just over a year to experience a national design classic first-hand – the Routemaster bus. By the end of 2005, the curvy, hop-on, hop-off buses will have been replaced by ostensibly cleaner, more efficient models, but they’re going out with a bang – or at least the stutter of an engine.

The RM (as the London Transport Museum likes to call it) will be 50 years old in October, the date when the first prototype, RM1, hit the road. But this week sees a flurry of activity from the LTM, and passionate independent designers, ahead of an anniversary rally next weekend, 24 and 25 July, in Finsbury Park.

Supported by the LTM, as well as various bus companies, the rally will show off the original RM1 and other London Transport vehicles. Ahead of next year’s RM death sentence, it’s a bit like the Queen’s Golden Jubilee being followed by Britain declaring itself a republic. But that’s even more reason to celebrate.

The LTM’s in-house design team has hurried out a selection of limited edition 50th and 175th anniversary posters for the rally, the latter honouring London’s first horse-driven bus.

The RM was originally conceived in 1947 to replace London’s huge fleet of trolleybuses. London Transport’s design team was headed by Arthur Durrant, and the final appearance of the new bus was influenced by industrial designer Douglas Scott, who worked to ensure the body shape was functional as well as attractive.

A new RM last entered service in London in 1968 – with a total of 2760 being designed and built. ‘They were designed for London,’ says a London Transport spokesman.

Why are they being replaced? ‘We’re not anti-RM, we’re pro-progress,’ he says, sounding like he’s been taking lessons in PR from Secretary of State for Transport Alistair Darling. ‘Bus passenger numbers are rising, and for the first time since 1965, we’re back up to six million passengers a day. Accessibility is key – around 10 per cent of passengers have a mobility issue, and that’s not including shopping or pushchairs,’ he says.

The looming deadline, and forthcoming rally, has not passed by graphic designer Sharif Moran unnoticed, either. Moran has filmed the entire journey of a number 19 bus, which will be one of the last RMs to leave circulation next year, and produced posters to accompany his DVD/ video.

‘When I first came up with the concept, I sat on the number 19 and noted down all the places I passed that I would have missed had I travelled from Finsbury Park to Kings Road by Tube,’ he says. Moran’s work is due go on sale in the LTM shop from 20 July.

Bus lovers can pop along to the rally and show their support for the RM. But to get the most from its final few months, spend £1 on a single from Aldwych to Hammersmith on the number 9 and enjoy the ride, while it lasts.

50 years of the Routemaster, a rally, takes place on 24 and 25 July in Finsbury Park, London

Lateral’s letter should get fur flying at No 10