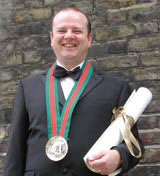 Last week, Wren & Rowe managing director, Paul Foulkes-Arellano, became the first member of the UK’s design community to become a Knight of the Brotherhood of Port.

Invested alongside Portuguese football superstar LuÃ­s Figo, he is now the proud bearer of a ribboned silver port-tasting bowl that can be draped around his neck, plus an elaborate scroll.

‘I’ve [also] been invited to join various judging panels because of my involvement with the wine industry,’ Foulkes- Arellano (above) notes.

Wren & Rowe had better bolt that port bowl to the wall if it wants him to stick around.