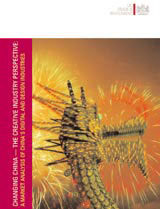 A report published this week by Design Partners and the Creative Exports Group highlights an abundance of opportunity in China for UK consultancies within the industrial design and interiors fields.

The report states that the design sector is calling for a shift in attitude from ‘Made in China’, to ‘Designed in China’, and that professional associations are growing to support this sentiment. The report also suggests that, ‘although industrial design is still in its early stages, designers are increasingly sought by domestic manufacturers’.

The analysis highlights opportunities in the publishing sector, which is seeing increased commercialisation and expansion; television is also a strong growth area. Film, radio and music are less advanced, according to the study – but they are all areas that are ‘benefiting from change’. The report says that ‘on-line games could see the greatest growth’.

‘There’s a lot of opportunity for industrial and architectural designers, due to the fact that there’s less legislation in place for them than in areas like computer gaming or broadcasting’, says Christine Losecaat, creative industries adviser at Design Partners.

‘It is not a market without difficulty or risk,’ she continues, ‘but China is going to be the biggest market in the world and if design groups don’t start looking at it now they are going to be left behind.’

All change for London