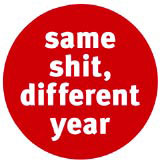 Acknowledged as one of the leading educational establishments in the creative arts and a breeding ground for many well-known designers, Central Saint Martin’s College enjoys an excellent reputation.

But that reputation may have gone to the heads of some final-year graphic design students, who have developed all the promotional material for the final-year show, which begins on Tuesday.