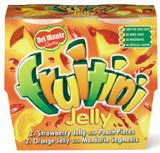 Cirio Del Monte’s Fruitini range of ‘snacking desserts’ has been redesigned by Parker Williams, as the brand aims to reposition itself in the highly competitive children’s lunchbox market.

Products go on shelf in the first week of June in branches of Asda, Safeway, Tesco and Waitrose. Cirio Del Monte is hoping to make a splash with the relaunch after Fruitini sold poorly in its previous format, a small ring-pull tin.

‘It was not at all child-friendly or convenient and the graphics were tired and dated,’ says Parker Williams creative director Tamara Williams. ‘It didn’t strike the balance between fun – which can be a tricky thing to interpret with kids – and nutritional reassurance for parents.’

Williams points to ‘interactive physical formats’ like Yoplait Dairy Crest’s wrap-style Frubes, but the group has gone for ‘pure convenience’ in its pack solution. Williams suggests the ‘lunchbox-friendly’ plastic pots, combined with eye-catching graphics, will overcome the brand’s former ‘barriers to purchase and usage’.

She adds, ‘Kids love splat and mess and the fruit explosion will appeal to them, without [us] trying to create characters from scratch, which lack street cred in any case.’

Fruitini is targeting fourto nineyear-olds, but the key to the branding is to make the product aspirational.

‘An 11-year-old is top dog in junior school,’ she says. ‘This is who kids should want to feel they’re emulating by [consuming] Fruitini.’

Analysts suggest the snacking desserts market is worth £1.5m per annum and is growing at 13 per cent year-on-year (source: Taylor Nelson Sofres).