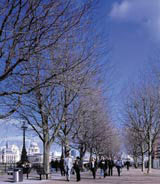 An ambitious review of the aesthetics of London’s public spaces, which aims to boost conditions for pedestrians, enters a crucial phase next month and could lead to a slew of urban public seating, lighting and signage work.

The project is currently on the final leg of its first phase. Where initial research concentrated on logistics, including physical barriers faced by walkers, the next phase, beginning in June, will focus on London’s streetscape and how it can be made more appealing to the general public.

Gehl’s brief is to identify where London’s open spaces fall down in terms of access, signage, lighting, seating and street furniture. The study focuses on 11 key zones, including the areas around Waterloo Station, Euston Square, Piccadilly Circus, Trafalgar Square and Victoria Embankment Gardens.

Commenting on his findings so far, Gehl describes London as bereft of places for pedestrians to stop and ‘enjoy’ the city. ‘What strikes me about London is that in all the major streets there are no public benches,’ he notes.

‘The team will look at how people use public spaces and whether those areas have life and if not, why not,’ explains CLP director of transport and environment Bob Coe. ‘It could be due to a lack of signage, or because areas aren’t welcoming enough.’

Gehl also alludes to an ‘invaded city’, meaning traffic has flooded into London’s centre, squeezing pedestrians out to the peripheries.

‘In London the traffic engineer is king,’ he asserts, ‘He has dictated how wide the pavements are and kept the streetscape trafficoriented.’

It is a point expanded on by Pentagram partner David Hillman. ‘The only signs in London are for motor traffic,’ he offers. ‘This contrasts with cities like Melbourne that has pedestrian signage at every major intersection, on a human scale and elegantly done.’

Elsewhere, Holmes Wood director Alex Holmes laments a lack of creative coherence in the capital’s street furniture. ‘If you look at any public landscape in London – bins, seating, signage, lighting, and paving – there is never one visual language. It always looks like different groups of people have added different elements. There needs to be one brief.’

Findings from Gehl’s report will be made public on 1 October. From there it is up to individual councils to decide if they wish to act on recommendations.

‘If governments pick up on proposals they will probably put design and architectural work out to tender,’ says a CLP spokeswoman. ‘But obviously we are at the behest of available resources.’