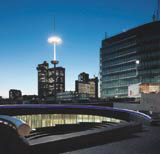 The positive and negative aspects of street-lighting design are illuminated this week with two initiatives contrasting its effects in urban and rural areas.

Equation Lighting Design has unveiled its masterplan for lighting concepts in the ‘Pool of London’ – a stretch of the River Thames from Westminster to Tower Bridge – while the Council for the Protection of Rural England began a campaign on Friday against the ‘night blight’ of light pollution.

Equation’s best practice lighting proposals are intended to promote the night-time economy, improve the environment and reduce levels of crime. The plan’s sponsors, Pool of London Partnership and property firm More London, hope the guidelines will be adopted by designers and their clients in future projects.

The CPRE, which has comprehensively mapped the spread of light pollution for first time, is calling for all outdoor lighting to be more ‘night sky-friendly’. It will lobby the Government to recognise light spill formally as a pollutant.

The average amount of light shining skyward at night from each km2 of England rose by 24 per cent between 1993 and 2000, the charity claims. ‘Light pollution has been talked about for more than a decade,’ says CPRE chief executive Kate Parminter. ‘But there’s still nowhere near enough awareness or action to tackle it.’

‘Human scale treatments’, interaction with pedestrians and reducing light spillage are all embraced by Equation’s masterplan, which extols the ‘payback’ in fewer social costs of investment in good urban lighting.

‘Lighting [design] is all about contrast,’ says Themis. ‘Reducing the visual noise of base lights like street lamps would mean less [spot-] light on buildings would be more effective. Light needs to be more discriminating. Older technologies didn’t allow the degree of control we have now.’