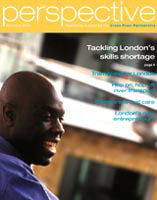 The first issue of Perspective launches this week. Paper White won the work after a paid creative pitch against two other groups.

Cross River, which comprises 11 organisations working on regeneration projects on, over and around the river Thames in central London, aims to better promote its project work, as well as lobby the Government.

The magazine, which is purely editorial and features no advertisements, is not designed to be a glossy, expensive-looking publication, says Paper White creative director Jonathan Howkins.

The design is understated so the magazine can communicate its activities to a serious, diverse audience, Howkins says. It features original photography and ‘well signposted’ editorial.

Perspective will feature articles promoting some of the 90 projects currently being undertaken by Cross River.