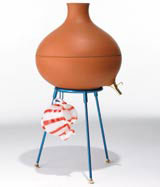 Seven British designers are to unveil exclusively-commissioned work as part of an international exhibition opening at Experimenta 2005, the fifth Lisbon Design Biennale, which opens this weekend.

The British Council selected the designers, from a long-list of 30, to produce work for My World/ New Crafts in Design, which will explore the relationship between craft and contemporary design and production. The exhibition is curated by Emily Campbell, head of architecture and design for the British Council.

My World will examine the value of personal creations in a hi-tech manufacturing world, along with the ‘power of the local and the individual in an age of global communication’. It hopes to explore the growing use of craft methodologies in contemporary design production, noting the rising number of designers imbuing their work with individuality and identity in the face of industrial and digital production processes. ‘This notion of craft, which is so elusive, was preoccupying an Experimenta think-tank and so we came up with a thesis on how craft is affecting design,’ says Campbell. ‘I put together four ideas of how craft relates to design and manufacturing. Craft seems to be about a sensibility, subjectivity and a personal world and manufacturing now appears to want a piece of this subjectivity.’

Campbell and co-curator Andree Cook decided to approach designers who typically work on commercial projects and asked them to create something inspired by their work, but which is personal and more craft-based.

Jonathan Levien and Nipa Doshi of London product design partnership Doshi Levien have produced an installation inspired by Indian markets, offering a mixture of manufactured products, paintings and prototypes that span the disciplines of craft, design and manufacturing.

Spatial design consultancy Neutral was formed by architects Christian Grou and Tapio Snellman in 1998. The duo has developed a specialism in the moving image, using film and animation to examine architecture and urban space. For My World, Neutral has drawn on its experience in the airline industry to create Rescape, a 3D audio-visual installation that presents a surreal, airborne view of the ground, tracing the impact of human development across Britain.

‘We had a job with Lufthansa that involved lots of flying around different cities, and we spent a lot of time thinking about how this distorts your perception of the Earth. We decided to use reconstructed high resolution aerial photographs, which were then distorted and combined in a slightly surreal way,’ explains Snellman.

Product designer Peter Traag’s contribution to the exhibition is a set of chairs, formed by sucking layers of brightly-coloured industrial felt into ‘concave depths’, using a vacuum mould. His premise is to look at how the rules of technical or industrial processes can be changed to make products more individual.

The Lisbon Biennale runs from 17 September to 30 October at the Estufa Fria, Parque Eduardo VII, Lisbon. It will exhibit at the Design Museum in London from June to September 2006.

• Reuse and recycling of materials, so that process of construction is on show in final product