Design Week: What is your title?

Amanda Rodriguez: Technically, my title is a director, because I am the director of the Three Kings Studio we opened in South London. But I would prefer to say that I’m a tattoo artist more than anything else.

AR: I went to Rhode Island School of Design, and I studied furniture design. I basically learnt how to draught furniture. It was very technical; I was learning woodwork and how to weld. And there was definitely less of the computer side of things.

This didn’t necessarily feed into what I’m doing now in an obvious way. It was very technical, and from that I obviously got a good understanding of some technical skills. Although it gave me those skills, I wouldn’t say it influenced my actual art.

AR: I graduated in 2005, and at that time most furniture designers were basically working in CAD. I hadn’t learned CAD because the school I went to had a contract with Apple, and Apple didn’t have CAD on its computers. It was a struggle.

After working in a really manual labour job in a fabrication studio after school, I knew I wanted to do something else, but I didn’t really feel like I had what I needed to be in the furniture world.

One thing I did for a long time was web design, and I did that alongside my tattooing apprenticeship. As you can imagine, it was much easier for me to make a living doing web design, but I carried on doing this tattoo apprenticeship four days a week, after work and on the weekends. After a year I got my licence and I started working, but it still wasn’t really a full-time thing for me.

For many years I did web design, and I’ve done work for the likes of Sony and Apple. Eventually, I found a tattoo shop that was really close to my house, and it was a really good opportunity and I really used it as a stepping stone to progress my work and develop my style. Once I got the job with Three Kings, I was able to do it full time and not take on any other work.

AR: I laugh about this now, because it’s a really terrible story. I was at my house painting a portrait of my step grandmother who had passed away and one of my roommate’s friends came by and he was a scratcher. (A scratcher is someone who does tattooing without a licence.)

He saw what I’d done and he said I’d be a really good tattoo artist, that I should look into it. And I did, and I fell in love with it. 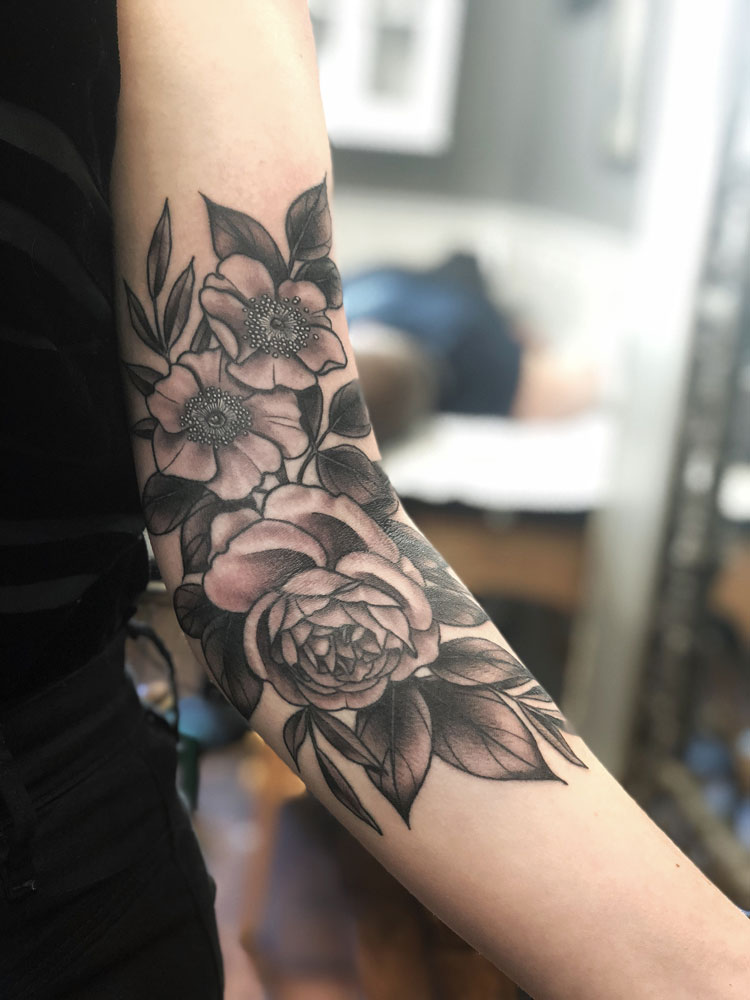 DW: What does a typical job look like for you?

DW: What are your main day-to-day tasks?

AR: Back when I was tattooing in New York, I would be booked out for a few months at a time. I prepare for each tattoo maybe a few days before. I get up, get to the shop, set up and go from there.

Earlier on in my career I would do more than one tattoo in a day, but as I’ve progressed, I’ve really started to like doing just one, bigger piece during the day. But of course, not everyone can sit for that.

AR: Every once in a while, you’ll get someone who wants something in your style, but wants something that’s really difficult to conceptualise in your head. One girl emailed me, for example, saying she wanted a tattoo of falling books and roses, and in my head I just couldn’t work out how it would look (final tattoo pictured below).

It’s those kinds of requests that really challenge you. Those tattoos are always the ones you end up loving, but at the beginning, you have no idea how to figure it out. It’s nice when people come and challenge you with something though, because it forces you out of your routine – a rose on the shoulder is easy to do, but when a person wants something really unique, you really have to think about it.

DW: How closely do you work with other designers?

AR: Sometimes I will get inspiration from bouncing ideas off of my colleagues. But a lot of the time I prefer to do my drawing at home. It’s just because I’m most comfortable where I’m not going to be distracted – but every once in a while, a colleague will definitely give me a great idea for a piece.

DW: What strengths do you need to be a tattoo artist?

AR: You need problem solving skills, because it’s challenging to get people to sit still. You’d be surprised the amount of people who will squirm while you work. It’s hard, because you don’t want to yell at your client, but at the same time if you’re doing a tattoo and someone moves, you’ve got to figure out how you’re going to fix that. It’s art that exists on a living breathing canvas, and you have to take that seriously.

I think tattooing has actually given me some really good social skills. It’s so easy to judge people when you first see them, but I’ve learned that actually everyone has something interesting to say. It’s very rare to meet someone that isn’t cool. Even if you don’t like their idea, if it’s something you’d never get yourself, maybe it means something to them. 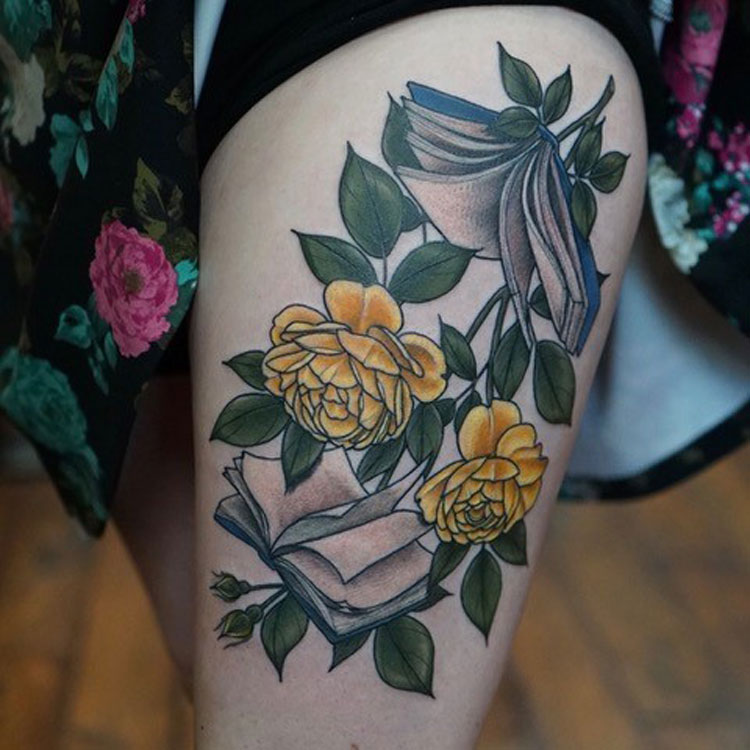 I still struggle with that sometimes. Obviously, you care about your client and you don’t really want to hurt them, but tattooing is always going to hurt them to some extent. Working through their pain can be a really difficult thing. I would never pressure someone into finishing a tattoo, but some people do push themselves very hard and end up being miserable throughout the experience. You have to work through that.

DW: If you were interviewing for an apprentice tattoo artist, what would you be looking for?

AR: If I was looking for an apprentice, I would want to know their expectations and their motivations. I’d obviously look for someone who was passionate and who had drawing skills, but I think it’s incredibly important to have realistic expectations beyond what Instagram might make tattooing life out to be.

Instagram really glorifies the job. There are certainly people who are living an amazing life from this, but what I would want anyone to know is that this is hard work. If you don’t work, you don’t get paid. You don’t get sick days. You don’t get vacation days. There are slow seasons – at the end of the day, you’re relying on other people to want what you’re putting out there.

I love it, but there are things in there that people need to know before they consider being a tattoo artist.

DW: What advice could you offer people considering tattooing?

AR: It’s so hard to get an apprenticeship in places and many people end up teaching themselves. Personally, I’m against that, but also it’s one of those things that some people don’t have the option otherwise.

I would say if you’re really passionate about it, you’ll figure it out and make it work. You can’t expect that you’re just going to be handed an easy path, because there isn’t one. I would really emphasise the apprenticeship route, but otherwise the best way into it would be to go and get tattooed by different people and build up those connections. If you cold call a place, they will most likely turn you away.

AR: To be completely honest, there is an oversaturation of tattoo artists. And I think a lot of people don’t really know what good tattooing is. There are a lot of things that are really popular and Instagram has really changed the game, but its really important for people to have their own developed style.

It’s a really invaluable thing for you to do in the beginning, because even though you’re really just wanting to do whatever comes your way, you have to have a style that will drive people to you.