Industrial design studio Seymourpowell has unveiled the plans for Quarter Car, a mobility concept that aims to provide “shared transport through a personalised, autonomous travel experience”.

Jonny Culkin, a designer from the London-based studio, tells Design Week that the concept brings together a range of current themes in automotive design.

The car concept is autonomous, electric (using sustainable energy sources) and can carry up to four passengers at once. 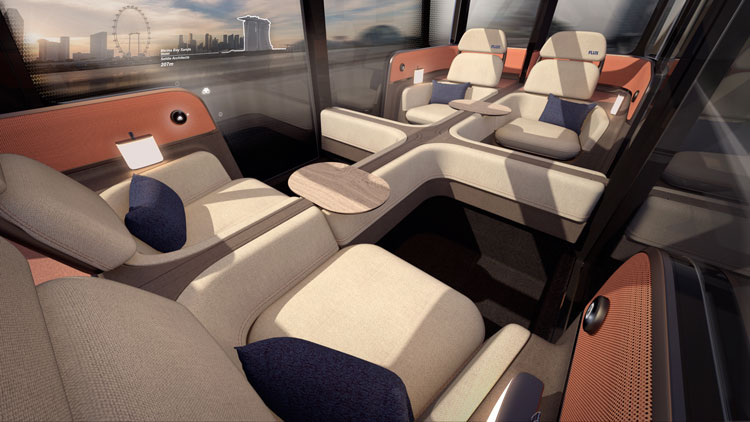 It is also a response to shifts in consumer behaviour, Culkin says, as people show more interest in non-ownership models.

There’s also a financial incentive for ride-sharing apps to look into new transport models.At the moment “profitability isn’t even on the horizon,” Culkin says; in 2019’s second quarter, Uber lost more than £4m.

Four passengers using one vehicle at the same time could help “improve their business metrics” and fix the inefficient “Uber Pool problem” as they would be paying for the service concurrently, he adds.

Mindful of these themes, the studio went back to the “blank page” to work out how to incorporate as many as possible. Culkin says that the design team asked itself: “What’s the first vehicle going to look like that’s designed with these things in mind?”

A focus on interiors 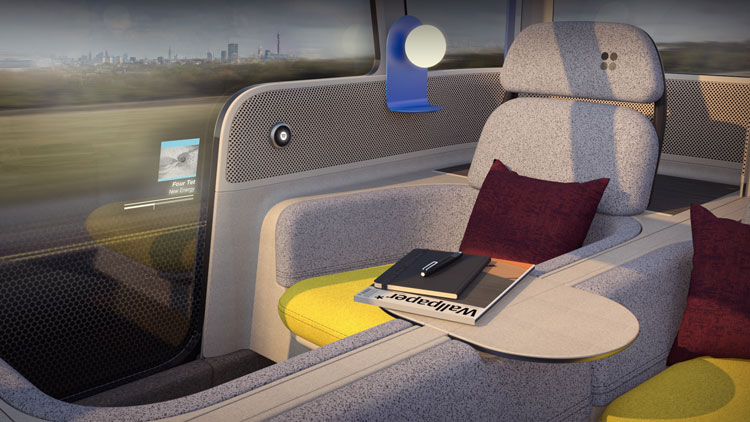 A traditional car has been designed for a reason, Culkin says: “to move sleekly through the air”. Quarter Car looks more like a bus, but with these types of vehicles, you can “define efficiency” according to different metrics.

The focus is on interiors – “it’s designed from the inside out”, Culkin adds. By eschewing typically aerodynamic design, it focuses instead on the interiors, which are modular. Retractable walls can be divided so that passengers can sit solo, or as a pair, or in groups of three and four.

“We’re trying to make one car do the work of four or five Ubers today,” Culkin says. “We can’t keep driving around in Ubers where it’s just us and a driver.”

It also has relatively high ceilings; 1.7m compared to a Toyota Prius’ 1.4m. 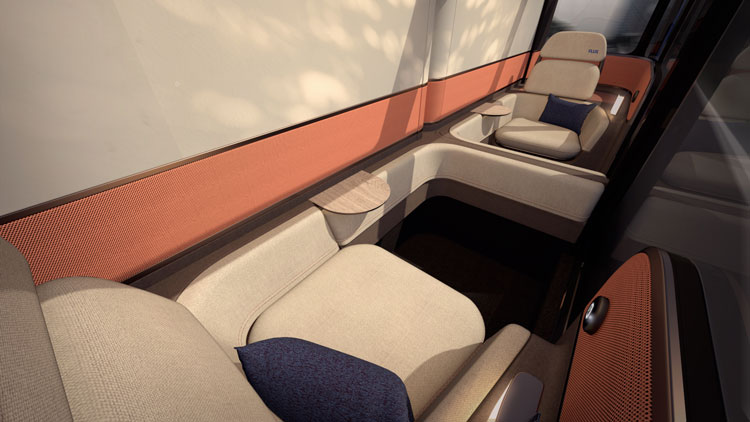 There is “embedded screen technology in the glazing”, allowing for visual displays on the car’s surfaces.

This technology, along with artificial intelligence brings a “contextual awareness” to the vehicle and its surroundings, which could create “experiences” for passengers, Culkin says.

A potential experience could be a personalised city tour for passengers, based on their interests – pointing out aspects of buildings with virtual reality for those interested in architecture, for instance.

It could also provide ride sharing apps with a more diverse business model. Culkin suggests a two-tiered system; a cheaper ride with advertising, and a more expensive experience without.

That advertising wouldn’t be “oppressive”, Culkin says but “contextually aware”. It could link up with a ride’s surroundings and a passenger’s interest and suggest a specific shop that the vehicle might be passing on its journey. 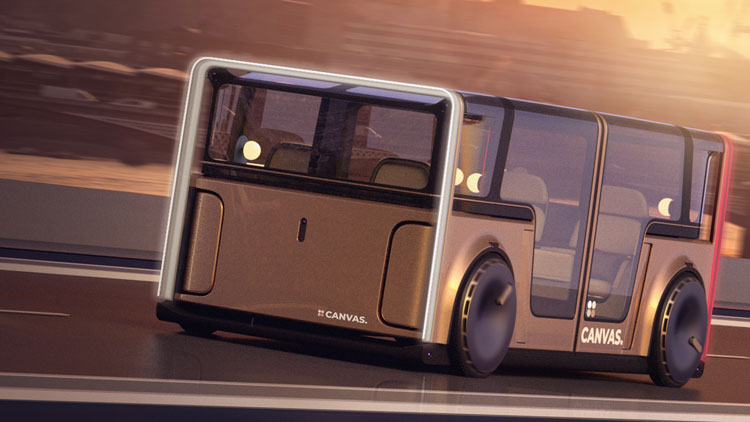 The vehicle is electric and gives off no emissions. Ideally, it will also be run with clean energy. Culkin suggests how an energy service like Bulb, which aims to provide clean energy, could collaborate in this regard – by offering rides at higher prices for those who are willing to pay for cleaner rides.

One of the misunderstood aspects about air quality is about the “silent killer” in terms of particulates in the air, according to Culkin. Seymourpowell was interested in how Quarter Car could track the air quality in urban environments.

“If you’re going to fill a city with these vehicle, then maybe they can be diagnostic tools so they can understand air quality at all times and the Government can make appropriate measures – such as issuing warnings”, he says.

It could also use carbon capture technology to help clean the air in cities, which includes trapping carbon dioxide in the air.

Between public and private transport 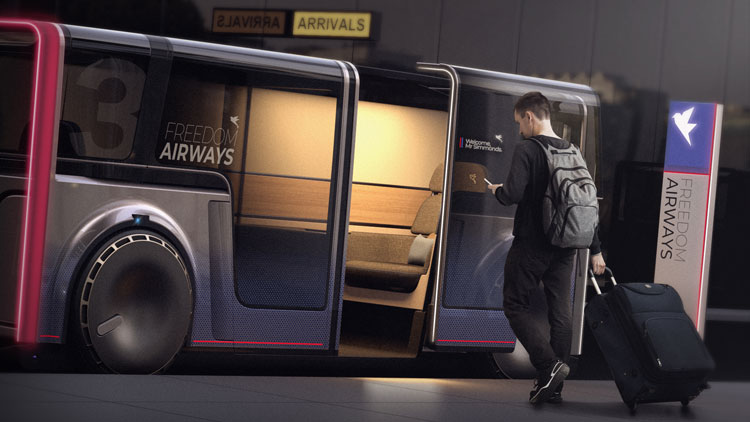 Culkin, who comes from a vehicle design background, says this the Quarter Car is a “very different proposition” to a traditional car. It’s about providing a better vehicle, somewhere between public and private transport.

The idea is for the vehicle to “supplement” public transport, not replace it, Culkin says. The design is also intended to engage with idea of urban design more widely; Culkin asks whether we could build better side-walks or implement sharing practices in other modes of transport such as scooters.

And while many might agree that a greener transport system is a good idea, many designs for transport innovation remain conceptual.

Culkin puts this partly down to “regulatory” issues: “We’re coming out of a vast period of excitement about autonomy, and what we’re experiencing is a slow-down in concepts.” There are issues around safety and how autonomous vehicles could be implemented into urban environments, for example.

Through widespread sampling and prototypes, a “wider consumer perspective” will have to be adopted as a way forwards, the designer believes. Some passengers might feel nervous about getting in an autonomous vehicle and they need to be reassured.

“It requires all these things to come together – there’s no single bullet,” Culkin adds. He hopes that concept designs could engage both public and private bodies, to reassure people about the viability of these new systems of transport.

When could we see a first generation ride-sharing vehicle?

While it’s difficult to put a date to these concepts, Culkin says we could see a design like this implemented in London in a

round five years. Though “the answer works different place to place,” he adds. London, with its complicated road system, would be more difficult to navigate than cities in America which are build on a grid system.

In certain areas of London, Culkin believes we might see “pedestrianisation” and the “geo-fencing” of areas where vehicles like this could operate. “I think you’ll likely see this exist in a commercial space rather than a private sphere first because they will be able to afford the initial uptake costs.”

“But once one place cracks it, and everyone can see the benefits,” Culkin says, “that’s when everything will speed up.”