The Design Museum turned 30 this year but Yuri Suzuki’s Sound in Mind is the first exhibition of sound design it’s ever held. “People have finally realised the importance of sound design,” Suzuki says.

“Most of the six senses have been covered in the industry — visual communication, taste and smell, haptic touch — but something that’s not been investigated enough is sound design,” he says. “Suddenly it’s really important.”

Pointing to the popularity of voice-activated assistants like Apple’s Siri and Amazon’s Alexa, as well as the renaissance in popularity of podcasts, Suzuki says it’s no surprise that companies are more interested than ever in sound branding to communicate their message. 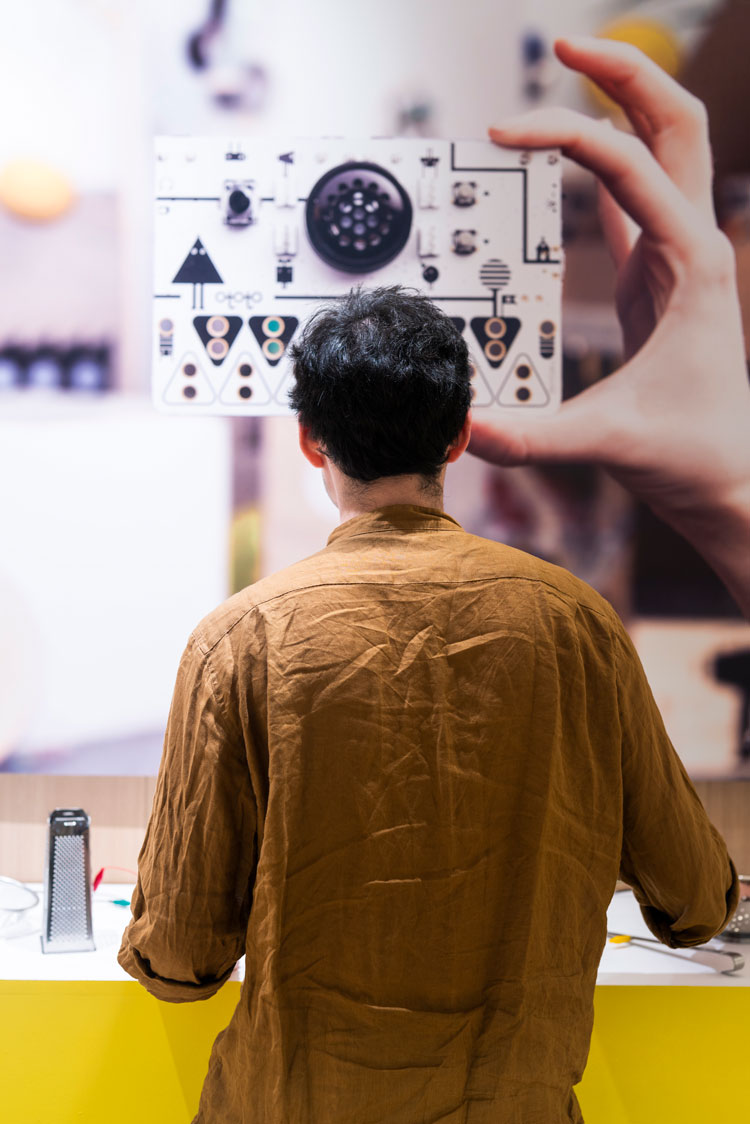 The exhibition is a retrospective of sorts, exploring Suzuki’s career and where sound design is positioned for the future. It features projects as far back as 2008, when Suzuki was a graduate at the Royal College of Art, as well as installations that been adapted to the museum’s architecture. It is loosely split into four sections; inspiration and research material, the social aspect of sound, interactivity of products and the different technical media Suzuki uses.

A running thread through Suzuki’s work is a sense of playfulness. One highlight is the Tube Map radio which lays out the circuit board of a radio as a London Tube map. It is intended to show people how electronic devices work.

By laying it out as an object that many people use every day, Suzuki hopes that they might have a better understanding of what happens inside the machine. As well as being a teaching tool, the design has a sense of humour; Battersea Power Station is represented by a battery, Speaker’s Corner is a speaker.

Exhibitions can be a testing ground 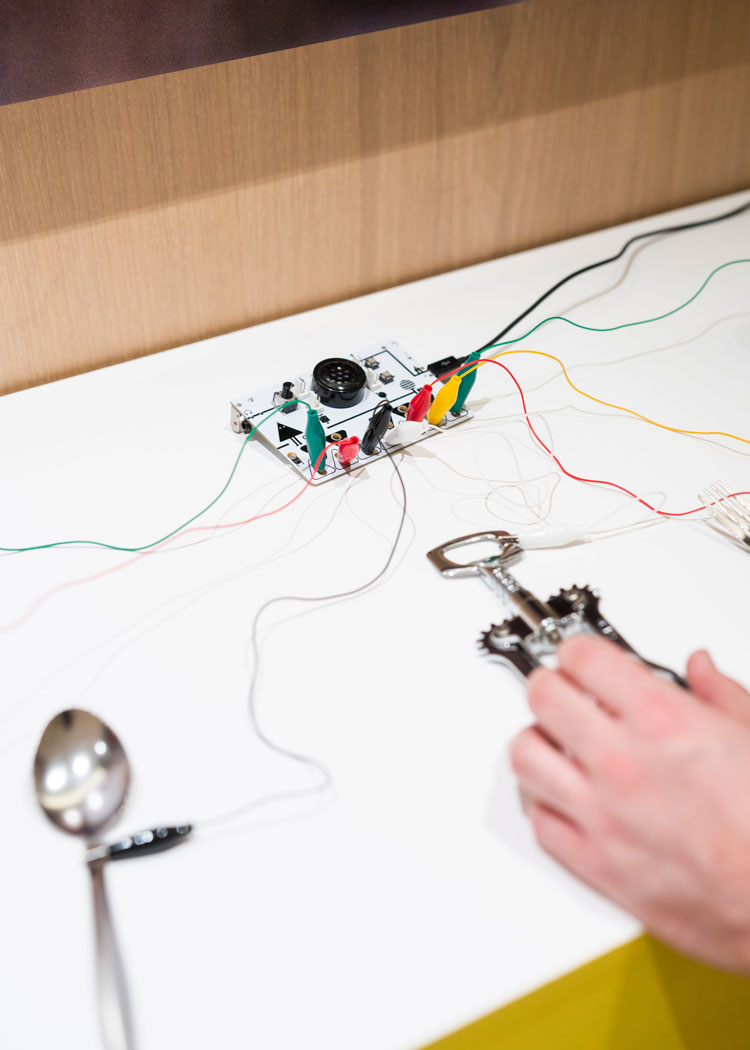 One of the pieces on display is Colour Chaser, which reimagines how people can read and write music. A miniature vehicle detects and follows a black line on a blank piece of paper as users scribble coloured ones along the path. The machine follows the pattern and translates the visual data into sound.

This was part of Suzuki’s graduate show, and the designer says it’s interesting to chart its development from initial concept. A company asked for the piece to be a product, and now Suzuki is working with Chinese manufacturers on producing a model, with investment from Pentagram. After a two-year period, the first prototype is coming out this month.

It highlights the ability for exhibitions to be a “testing ground”, as Suzuki calls them, which is essential to the design process. When creating a new product, it’s “hard to imagine without testing”.

“People behave totally differently — and often unexpectedly — so it’s important to start using protypes as early as possible. An exhibition, where visitors can try the installations out, is a perfect testing ground.”

“I want to create a playground” 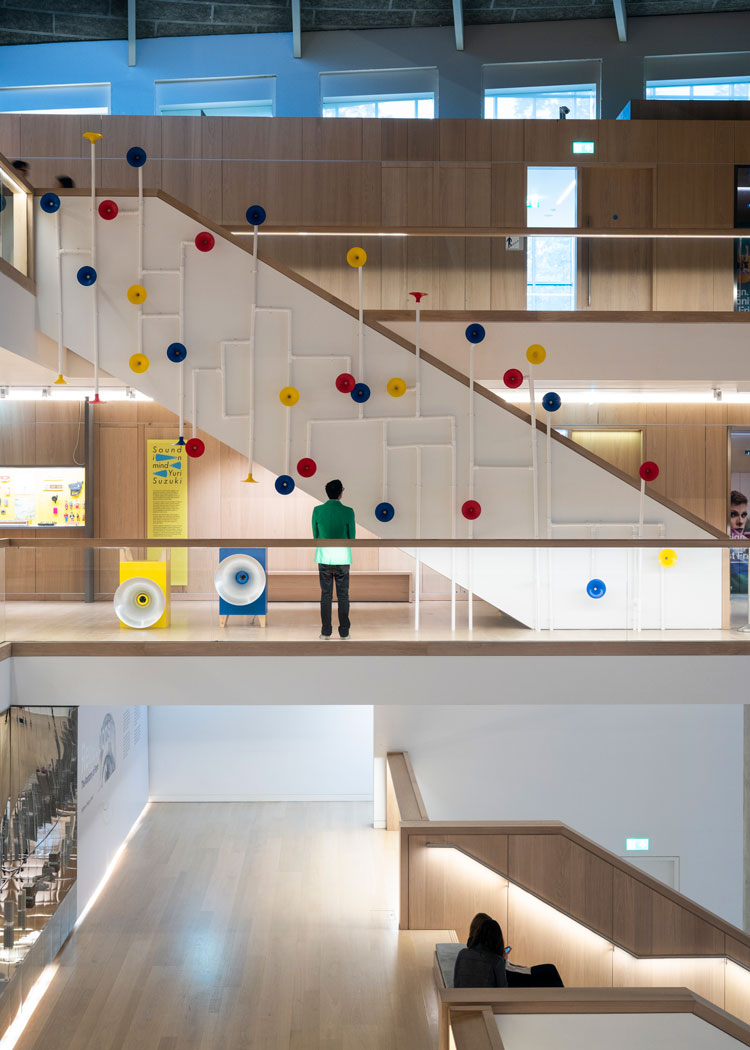 Suzuki is interested in the social aspect of sound design. He recently moved to Margate, which has inspired him to think about ways to “increase opportunities to start conversations with people”.

It reminded him of an installation he created at the High Museum of Art Atlanta in 2018, a state where there is “not enough communication” between different groups of people because of gentrification.

Margate, he says, is similar; where an influx of creative people and local population means there’s a lack of communication between different social groups. Suzuki says: “I want to create a playground where anyone can go and start a conversation.”

This was perhaps most obviously explored in Sonic Playground — the installation in Atlanta — where oversized cartoon-like listening devices in bright colours were dotted around a public place in an attempt to encourage conversations between strangers.

But it’s also the motivation behind Acoustic Pavilion, a modular installation that is fitted to the side of a staircase at the museum. Over the exhibition’s time frame, pieces will be added to the installation, as a way to show the evolution of conversations.

In November 2018, Suzuki became a partner at Pentagram, having closed his eponymous design studio. Being at Pentagram widens his scale and scope, Suzuki says. He has worked, for example, on the sound identity for a lifestyle brand, founded by the artist Ryan Gander and creative director Tony Chambers.

Upcoming is a project on a music video with OK! Go, who are known for their visuals as much as their music, perhaps even more so. Their viral video for Here It Goes Again — featuring inventive use of treadmills — won a Grammy for best music video in 2007, and it has 47m views on YouTube.

Suzuki is also busy with more exhibitions. He has three projects lined up; a digital sound installation called The Welcome Chorus for Turner Contemporary Margate, a touring exhibition, Furniture Music at Lighthouse Glasgow in October and Speechless, an interactive sound installation, in November in Dallas Museum of Art in Texas.