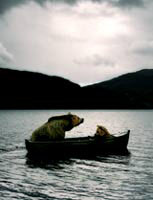 The second open exhibition of the Association of Photographers attracted some 700 entries from the UK and overseas, more than twice as many as last year’s show.

At its smart and spacious new premises in Leonard Street, near London’s Old Street, AOP has selected 88 photographs from a variety of sources: professional, amateur and commercial.

Nick Jones, who runs the gallery, stressed that the AOP Open is true to its word. No themes, no dates, no boundaries, no credentials are necessary. ‘We just wanted people to submit pictures they were proud of,’ he says.

It seems to have paid off. This is a wonderfully vivid and eclectic show, full of witty surprises, imaginative flights and tragic undertones. In the latter category, Adrian Fisk’s portraits of Asian women who were mutilated after their dowries weren’t paid sends a chill down the spine, as does Stuart Freedman’s horrifically wounded Hutu boy, taken in a rescue camp in Burundi.

If there had been a prize for wittiest picture it would have been shared between Rob Steel for his inventive View, in which a picture of an idyllic mountain scene is reflected in the preparation of a meal sitting on the table beneath it, and Jim Barron for The Cost Of Living, in which a pigeon appears to gaze longingly at a sign reading, ‘Best Bird Seed, 25p a cup.’ A close runner-up would have been George Logan’s digitally manipulated shot of two brown bears, parent and cub perhaps, sitting quietly in a dinghy in the middle of a lake.

One of the most striking and sinister images is Andy Palmer’s silhouetted figures against a corrugated fence in Beijing, while Zed Nelson’s extraordinary shot of cows being herded by a galloping cowboy on some dusty plain begs all kinds of questions: Where was he when he took it? What was the speed setting? Was it just a lucky shot or did he spend hours waiting for the right moment? You don’t expect hospital medics to carry cameras around with them, which makes Dr K Brown’s study of a men’s ward all the more surprising.

Having recently been incarcerated on just such a ward myself, it brought back all the disinfected bleakness of the NHS with a nasty jolt. The three pictures I’d most like to have taken were Karan Kapoor’s holiday snap to die for, showing a diving male figure underwater – if digital manipulation was involved, it’s effortless and invisible, Brian Stewart’s dark, painterly picture of a derelict boat in the eye of a tropical storm, and Nick Ivins’ eerie male portrait showing only a horizontal nose and brow protruding from the steam of, I guess, a bath. Presumably the subject can be identified from these features.

The picture the judges would most like to have taken, since they voted it Best in Show (sponsored by Olympus), was Bijan Seylsepour’s Dog and Horizon, showing a dalmation on the beach. What a way for Seylsepour, a photography student in Falmouth, Cornwall, to start his career.