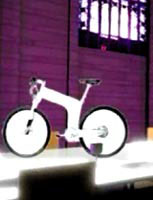 The thousands of busy New York commuters using Grand Central Station every day will have something new to detain them on their way through the building in October – a banqueting table that measures 50m, laden with 100 objects chosen to represent the very best in UK design.

This is Great Expectations, an exhibition designed by Casson Mann for the Design Council as part of the two-week UKinNY festival. The exhibition will then split in half and tour. The idea is to present Britain as a creative, innovative country rather than perpetuate the chocolate box image that many Americans still have of Britain.

‘Perceptions of Britain abroad are still shocking – the Queen, tweeds, Wimbledon and rain,’ says Roger Mann, partner of Casson Mann, which is instead planning a ‘feast’ of British design intended to sell, not the particular objects, but the expertise of British design to US companies. The exhibition needs to be attention-grabbing to engage the time-poor commuters; it also needs to be flexible enough to tour, all within a £650 000 build budget, including shipping. Casson Mann’s approach is to split the 50-metre-long table and arrange it on either side of the main pedestrian thoroughfare so that the commuters walk through the middle, beneath a flamboyant flourish of structural ‘table-cloth’ developed with structural engineer Atelier One that rises up from both tables to create a canopy above the walkway.

The consultancy also hopes to create a noticeably different ambience for the space by using Prismex edge-lit acrylic that glows, to resemble a huge lightbox for the table, plus ambient lighting and sound. The objects, that range from fashion to TV ads, are then arranged (and securely fixed) to the table and accompanied by captions like speech bubbles on the table to continue the dinner table theme and tell the innovation story of each object in brief.

Further details are accessible on six touch screens. The MDF chairs along either side of the table are a reference to dialogue, not only between the two countries, but between designers and business, and exhibitor and visitor.

Design needs to inch out those stray characters