Although based in South Africa – and keen to promote the creativity of its host country – it’s really an international event.

Who else but Design Indaba could encourage Paula Scher and 81-year-old Seymour Chwast to fly for 15 hours to present? Could have Michael Bierut return for several years running to compere?

And for a design conference, it’s brief is remarkably wide. So the community-focused design of Jeanne van Heeiswijk is followed by Brazilian chef Alex Atala, who brings burned flavours into his food to represent the deforestation of the Amazon.

Artist Nicholas Hlobo descends from a cocoon, chanting in Xhosa, while his presentation is broadcast behind him as a subtitled film. A break from the traditional project/process/explanation presentations.

And with such a diversity of speakers, styles and work, you inevitable start to look for connections. So the musical interface work of Google’s Alex Chen is echoed by Asif Khan’s musical pavilion for Coca-Cola at the London 2012 Olympics.

Similarly, simplicity, clarity and directness is visible both in Ben Terrett’s work on the Government Digital Service and in the wildly different arena of Marti Guixe’s food designs.

You also start to look for differences. For example there are divergent definitions of creativity. To Alex Atala it isn’t doing something never done before, it’s ‘doing something you know, in a surprising way’. To Paula Scher it seems to come almost as a reaction to problem solving, to overcoming obstacles. And to illustrator Christoph Niemann it’s ’87 per cent effort, 7.5 per cent inspiration, 0.5 per cent talent, and 5 per cent staying off the internet for 90 minutes.’

And you’re also forced to confront the very definition of design, and its purpose. Is design, as in the case of the work of Louise Fili or Matthew Carter, about making the world a more beautiful place? Or, like Alex Chen or Marti Guixe, about providing moments of surprise and delight? 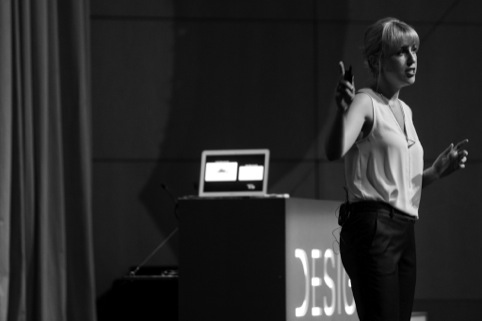 Should it be – as in the case of the Government Digital Service, about demonstrably improving our quality of life?

Or is it – as Dutch designer Daan Roosegaarde and synthetic biology specialist Daisy Ginsberg both seem to suggest – about challenging accepted norms, and changing reality itself.

As Ginsberg says, ‘Designers can’t just solve problems people bring to us – that’s what engineers do. We need to challenge those problems and create new questions.’

All the best events and conferences leave you with more questions than answers – and Design Indaba is no exception.

If the jacket fits