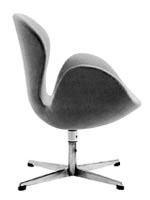 WHO: Scandinavian architect and designer who came to represent the very best of Danish design. An outstanding all-rounder responsible for popularising functionalism by giving it a more sculptural, refined and elegant image.

WHAT: An output in the Fifties and Sixties which ranged across disciplines, countries and scale, reflecting a total approach to design. St Catherine’s College, Oxford, is testament to Jacobsen’s multi-disciplinary skills: he designed every detail of the building in the early Sixties, right down to the cutlery used.

WHERE: You will find Jacobsen’s famous Series 7 chair for Fritz Hansen in every commercial interior on the planet. Not bad for a designer with a strong sense of local (Danish) identity.

WHY: Two impulses governed Jacobsen’s career. One was a love of nature – he studied trees and plants throughout his life. The other was a strong interest in painting and sculpture – his use of organic forms reflected an artist’s approach unhindered by technical constraints. This prodigiously gifted student of Copenhagen’s Royal Academy of Fine Arts graduated in 1927, but didn’t really find fame until the Fifties when he developed a way to relate art and nature to modern production.

ICONS: The 1953 Series 7 chair is the much-reproduced best-selling classic, closely followed by the Egg, Swan and Ant chairs. The newly refurbished SAS Royal Hotel in Copenhagen (1959) is a classic of a different kind. Still in production, like so much of Jacobsen’s timeless work, is the Cylinderline range of tableware for Stelton. In London, you can do worse than check out the Danish Embassy in Knightsbridge.

INFLUENCE: Jacobsen proved that it was possible for the multidisciplinary designer to maintain individual artistic control in a brutalising age of mass production.

ODDBALL: Shocked his parents as a child by painting his room entirely white, covering up expensive coloured wallpaper in the process. Started as he meant to go on.

SOUNDBITE: ‘He had the imagination and the skill to carry out a total design, to create a world of his own’ – Alan Bullock, master of St Catherine’s College, Oxford.