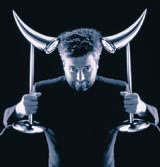 WHO: Philippe Le Roi, the first global superstar of design. Black jeans, leather jacket, designer stubble and a complete set of Harley Davidson motorcycles parked in every world design city for his use, all started by the same key.

WHAT: Starck has lent his signature to a bewildering array of contemporary products and environments, from TV sets, cutlery, kettles and chairs to toothbrushes, yachts, restaurants and hotels. He has been called the Picasso of the Nineties and, perhaps with reference to his spreading waist and enormous appetite for life, Gerard Depardieu with a slide rule, or the Pavarotti of design.

WHERE: In Paris, where Starck grew up the son of an aircraft engineer, and found fame in the Eighties with the interior of CafÃ© Costes, there is a street which bears his name and features his design right down to the bins. In New York, there is the Royalton Hotel; in Miami, the 40-shades-of-white Delano Hotel; in Tokyo, the Nani Nani building, styled after Godzilla.

WHY: The more Starck has played the rebel and wild man, the more he has been embraced by the establishment. When FranÃ§ois Mitterrand kick-started his career with a commission for the ElysÃ©e Palace in 1982, Starck himself was scandalised: ‘It was as if Clinton had called in Malcolm X to design The White House.’ Above all, he wants to ‘capture the violence of the idea’ and claims to have designed one of his most famous chairs, Doctor Glob for the Italian company Kartell, in the time it took for the seatbelt signs to go on and off on a flight to Tokyo.

ICONS: Everyone has their favourite love or hate Starck icon. Is the Juicy Salif lemon squeezer for Italian consumer product manufacturer Alessi a triumph of style over function?

INFLUENCE: Starck is unique outside the fashion industry in giving design genuinely international consumer appeal. And he’s managed it within the prosaic world of TV sets, kettles and office blocks.

ODDBALL: Beneath the whistling, happy-go-lucky figure with the French beret and the ludicrous Maurice Chevalier accent, there lurks a creative mind which, as Starck admits, is ‘dark, dark, dark’. He has a curious hobby – breeding square oysters, using tight square pens to interfere with nature.

SOUNDBITE: ‘I am not an architect, I am not a designer, I am an adventurer’ – Philippe Starck in Design Museum catalogue.