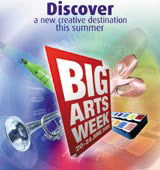 London design group Fijit has created the graphics for next year’s Big Arts Week, an initiative for professional creatives to volunteer their time to work with schoolchildren in the classroom.

Fijit waived its fee for the project, says Fijit creative director Dean Johnson, who is frustrated at the way art has been ‘squeezed out of the classroom’ over recent years. Johnson says the group wanted the designs to convey a sense of ‘enthusiasm, motivation and inspire a sense of fun’.

Big Arts Week project manager Constance Agyeman says, ‘Big Arts Week is a chance for children to discover the artists in themselves and get local artists involved with their communities.’ She estimates that 150 000 children have already benefited from the scheme since it was launched two years ago.

Big Arts Week is organised by charitable organisations Time Bank and The Forward Arts Foundation, along with input from a host of well-known artists, writers and designers such as Antony Gormley, Anish Kapoor, Sam Taylor-Wood, Ben Okri and Wayne Hemingway.