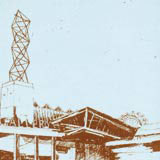 Following her lo-fi, sketchy illustrations for Selfridges’ Brasil 40º bonanza and Inside Space concession, Kavel Rafferty was commissioned by the South Bank’s Hayward Gallery in September to lend her gentle, line-drawn style to a series of limited edition prints of the South Bank (above and below), so the gallery shop could sell ‘affordable art’. The illustrations-meet-architectural drawings are available at the Hayward Gallery, priced £65.

You wouldn’t expect anything less than a trippy, kaleidoscopic piece of graphic design from Designersblock, above, for its 100% Guaranteed show flyer. (Is that Freddie Mercury at the bottom?) The invitation stood out against a sea of graphics trying hard to be sophisticated, but blending into one uniform look. It was designed by Paul McAnelly, a regular collaborator who has worked with Designersblock founders Piers Roberts and Rory Dodd for the past four years.

James Branch was first commissioned by the Architecture Foundation in June. His first work was for Architecture Rocks (below), the London Architecture Biennale’s closing party, followed by the Real Architecture lecture programme, (above). His ‘street culture’ aesthetic was spotted by AF events co-ordinator Elias Redstone. ‘I was attracted to the way he evoked architecture, without specifically being about buildings,’ he says.

Designersblock graphic design favourite McAnelly also has a day job. A year ago he was appointed head of graphics at luxury department store Liberty, where he took responsibility for all graphics and marketing material. His latest offering is the store’s Northern Lights-inspired Christmas identity, unveiled to monied Christmas shoppers earlier this month (above). McAnelly brings his left-field Designersblock thinking to Liberty, which is keen to invest in young design. Its current Christmas installation was designed by the Central St Martins College of Art and Design’s graduate design consultancy, Design Lab, under lead creative Andrea Berti (DW 28 October).

Leon has been spoiling the workers of London’s West End with its fast, affordable, super-healthy food since July, and has its sights set on the rest of London, if not the world, next year. Its graphics, created by freelance graphic designer Sandra Curtis, formerly of Michael Nash Associates, are inspired by bold, ‘naive’ Mediterranean fruit labels, such as Del Monte. ‘We wanted to reflect the honesty of the Mediterranean-inspired food,’ she says. Leon founder John Vincent, who named the company after his father, adds: ‘We’re [a] glamorous, healthy, bright, sexy and young [brand].’ Hear, hear.

Tomorrow London was responsible for an eye-catching series of posters for the British Council to celebrate its 70th anniversary. From May this year, they were displayed across the organisation’s 120 offices throughout the world – that’s quite some coverage for the London consultancy. Echoing Sir Peter Blake’s seminal album cover for The Beatles’ Sergeant Pepper, the posters were loosely based on gifts given to the council at events, and are designed to encapsulate the diversity of the British Isles, according to Tomorrow group director Stephen Flanagan. Young graphic designer Simon Brown, of Fascist Tattoos fame, was made ‘associate’ creative director at Tomorrow in July (Profile, DW 8 July).