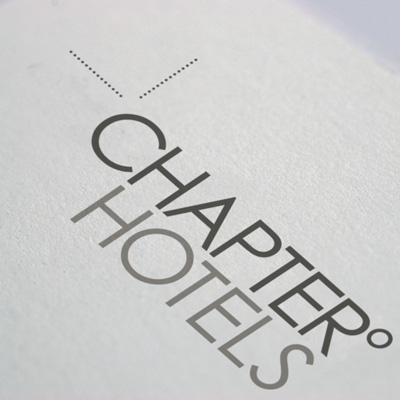 Dragon Rouge has created the identity for new British hotel chain Chapter Hotels, and will brand each new Chapter property as it opens.

The Chapter brand has been launched by Swire Hotels, which operates urban hotels in Hong Kong, mainland China and now in the UK.

Chapter has just opened its first venue, the Montpellier Chapter in Cheltenham, and is planning to open further venues across the UK. Chapter says each of its hotels will aim to draw inspiration from its local area. Exeter will be the next Chapter hotel to open, in 2012.

Dragon Rouge was appointed to provide a brand name, brand story and identity for the new overall brand and each of the hotels in the portfolio. The consultancy was appointed following a three-way pitch in 2009, according to client director Liana Dinghile.

Dinghile says Dragon Rouge was initially appointed to develop a hotel name, proposition and identity for the Swire Hotels Group to launch in the UK and this brief evolved to develop ’an umbrella brand with connected architecture at an individual property level’.

Dinghile says the brand is inspired by ’locally inspired and thoughtfully connected hotels’.

She adds, ’Each [hotel] represents an interesting and intriguing “chapter” of our British towns and cities. This is how they connect.’

The look and feel of the overall Chapter brand works as an ’invitation’, according to Dinghile, while the individual hotel brands will have their own characteristics.

The overall brand has launched with the opening of Cheltenham’s Montpellier Chapter. Located in the Montpellier area of Cheltenham, the 61-room hotel has opened in a Grade II-listed building refurbished by Make Architects.

Make Architects added a crescent-shaped wing and inner courtyard, surrounded by a veil of coloured glass.

Bespoke designer furniture was commissioned for each room, including chairs designed by Matthew Hilton. Central St Martins College of Art and Design was brought in to curate the hotel’s art collection, which includes work by Central St Martins students.

Dinghile says Dragon Rouge’s identity for the Cheltenham hotel was ’inspired by the leafy green suburbs of Montpellier’.

Dragon Rouge will now work on the branding for Chapter’s next outpost, in Exeter. Dinghile says, ’This will be very much a sister hotel, but, like siblings, will have its own distinctive characteristics.’ Dragon Rouge is also working on a full website for the Montpellier chapter, which is set to launch in January 2011.

Review of the year