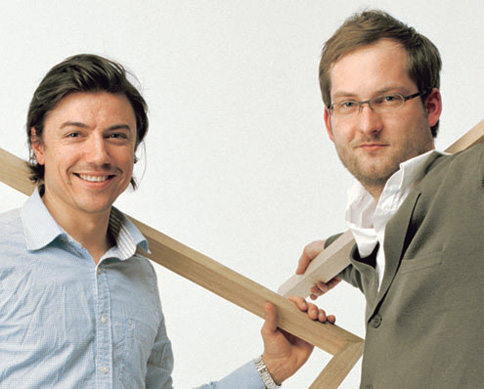 In one of Berlin’s many old warehouses and factories, now inhabited by creative young entrepreneurs, is one of the city’s most daring interior and product design consultancies.

If you are looking for an unforgettable bathroom, Ett la Benn is your consultancy. Since earlier this year, Chinese restaurant Toca Rouge in the city centre has boasted psychedelic toilet cubicles in which multi-coloured ceiling lights reflect infinitely in mirrored walls. As does the awed sitter, once they have stood up.

’Restaurant diners always comment on the bathroom of a restaurant, if it is good, telling people to go and try it, so we wanted to make an experience that people would talk about with their friends,’ says Ett la Benn partner Danilo Dürler. ’Which they do – people have even put films shot in the Toca Rouge toilets on You Tube.’

Ett la Benn, which is an entirely made-up name, was founded in 2005 by Oliver Bischoff and is managed by him and former watch designer Dürler, who joined the company the following year. Their first interior design project was for a fast food concept called Gorilla, which featured huge environmental graphics that would change every three months to denote the season. Sadly now defunct, the restaurant is still bearing fruit in the form of new recommendations for Ett la Benn. Together with its expandable team of freelances and interns, the design group is working on a raft of interiors for Berlin’s blossoming restaurant and retail scene.

’The business scene here is small compared to other cities, but for us it is good because in interior and gastronomy design there are a lot of people making new food concepts and opening up restaurants,’ says Dürler.

He talks about the ideal interiors brief being one in which the client is ’open-minded and you can persuade them to do something totally new’. Given a free rein at Toca Rouge, the group changed it from a bright, white interior to an all-black scheme with red highlights and low spotlighting. It is a very daring change for a small, mid-price restaurant.

’Maybe Berlin has more creative freedom than cities elsewhere in Germany or the world,’ says Dürler, musing on whether there is a defined Berlin style. ’While I don’t think you can really tell by the object where it is from, the style here is different from the Scandinavian look, being more freaky and playful and not so strict and clean. Yes, Berlin design has a twist, and maybe that is what makes it different,’ says Dürler.

The interiors side of the business is booming – Ett la Benn is currently working on a new wine store, the interior for a tailor and another restaurant concept, all due to launch next year. But about 40 per cent of the consultancy’s work is in product and furniture design, which Dürler reports is a very quiet sector in Berlin.
But the pair is passionate about furniture and last year created a lighting concept, Malva, made from dried-out washing-up sponges put to dry in a mould. The group is now working on other types of furniture with the innovative, compostable material.

For three years now, Ett la Benn has taken its work to Milan furniture fair, and 2011 will be no exception. This time, the group has famous Berlin designer Werner Aisslinger on side, who will be showcasing the upcoming sponge pieces at an exhibition on resampling at the fair. The pair hopes that this will provide them with their breakthrough into the global product design market.

For the future, Ett la Benn is focusing on strengthening its retail design and interiors portfolio, as well as on finding more producers for its furniture. In the meantime, in true self-starting, entrepreneurial Berlin style, Ett la Benn is planning on opening an online furniture store.