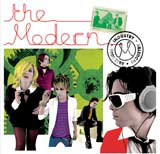 Form has created the covers and launch campaign for electro pop band The Modern’s next single called Industry, released on 20 February on Mercury Records. Paul West’s design references industrial images, such as Modernist and Bauhaus architecture, aeroplanes and machinery, with a sense of theatricality, created by the band’s exaggerated posturing. The rubber stamp icon will be adapted for each release.

All change for fast food giant