Despite being revered by its peers and clients alike, Tomato has kept a low profile for the past decade, as each creative evolves in a more individualistic direction. Liz Farrelly asks where are they now?

Speaking at three in the morning Australian time, from his new home in Melbourne, John Warwicker, a founding member of London-based studio Tomato, is candid, as always. ‘No one knows what’s going on at Tomato all of the time, and no one has for the past ten years,’ he says. Rather than revealing disorganised chaos, this highlights one of Tomato’s unique characteristics; despite its reputation and turnover, and ten busy creatives, there are no account handlers. A management team of two runs the office, while designers work in direct contact with clients. Collaborations and skill-sharing occur between all members.

From the start, in 1991, Tomato defied classification. A loose grouping of individuals holed up in a Soho loft, bristling with new technology, they worked with music, video, film, print, interactivity and installations – creating ads, environments, products, books, hit records (as the group Underworld), identities and exhibitions. And all for the likes of Nike, Pepsi, Levi’s, Sony and Orange – a dream team of clients to turn any rival’s head. Simultaneously, the gang who, at the time, consisted of Warwicker, Steve Baker, Dirk van Dooren, Karl Hyde, Richard Smith, Simon Taylor and Graham Wood, also produced personal work that got museum curators and design students alike gagging for more.

In the 1990s, Tomato had a stellar media profile and threw road-block parties to launch projects at its then Soho headquarters, but these days its public profile is distinctly low key. A member since the mid-1990s (along with Michael Horsham), Jason Kedgley describes the fact that its website has been ‘updating’ for a few years as ‘comedy’. More like tragedy, considering Tomato’s revolutionary on-screen graphics.

The 21st century team includes Dean Field and Tota Hasegawa, who bring new expertise and technical aptitude to the mix. Joel Baumann, Anthony Rogers and Tomas Roope officially joined Tomato in 1998, having worked closely with multimedia pioneer Antirom since 1995. With a new generation of students and designers unable to find up-to-date information about Tomato, and the news that founding member Wood has ‘left the building’ (to join advertising agency JWT in New York), curiosity is peaking about the state of play over at their headquarters, now in the Tea Building in London’s Shoreditch.

Having relocated to Stockholm with his family, a few years ago, Wood decided to go it alone, although he’s still a shareholder, as they all are. Despite being several time zones away, ‘he’s in constant contact’, says Taylor. Meanwhile, Baumann has taken up a professorship in Germany. ‘In today’s world, you are your own centre,’ as Warwicker puts it. ‘Anyway, my home is far better equipped than the Tomato studio,’ he adds.

As Tomato has always worked internationally, with clients and production houses in the US, Japan, Australia and Europe, location is no barrier. What is changing, though, is the nature of the work, the timescales and media employed. Once there were weekly meetings at which jobs would be shared out, and clients would call up saying, ‘We’ll have anyone,’ recalls Taylor. ‘These days there’s more of an emphasis on the individual’, he adds. 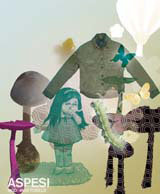 The diversity and scope of Tomato projects on the boil is awe-inspiring; their working methodology is more akin to internationally-renowned fine artists and musicians, than to desk-bound designers. ‘We’re expanding down pathways unknown to our selves,’ suggests Warwicker, again at his most enigmatic when describing ‘Tomato the entity’. Horsham points to how technological change affects Tomato’s ever-shifting status. Having just completed 20, 15-second-long films for a Volkswagen campaign in the US, Michael explains, ‘It’s a new strand of advertising that looks to the Web first, shot on a micro-budget. There’s an interesting world opening up, and it’s being defined as it’s being made, so you have to think and work in a different way.’

Lauded in the past for its aesthetic and technical innovations, Tomato is still busy defining the future and, if anything, it is becoming both more impressive and more personal.

Frayling to chair Designer of the Year

Cat that got the cream