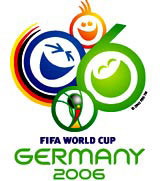 Tim Fendley of London N7, your fears have been realised (Letters, 19 December 2002).

The dreaded spirit of Keegan’s mullet is abroad in the Germany 2006 World Cup identity. Stefan Janzen writes from MetaDesign in Berlin to point out, ‘Whitestone International (London) developed the logo together with Abold (Munich).’

So, yes, there are Brits to blame. Janzen adds, however, ‘Rumours have it, that Franz Beckenbauer had much influence on the logo. We all know that Kaiser Franz never left the 1970s in a way.’

Dawton to be DBA chief executive