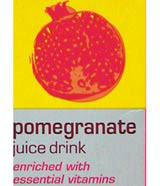 Parker Williams has created the identity and packaging for what start-up producer RJA Foods is billing as the first pomegranate juice drink to hit the UK.

Pomegreat will roll out in branches of Booths and Waitrose by the end of the month and RJA Foods managing director Adam Pritchard is pursuing listings with other retail multiples. ‘It’s positioned as an alternative to Ocean Spray cranberry products,’ he says.

Pritchard’s brief was to create a differentiated look right through the product offer. ‘Everybody [in the category] has images of fruits on their Tetrapaks and it’s all very boring. Parker Williams has created something that will stand out on-shelf.’

RJA Foods was established in January 2001 by Pritchard, a former stockbroker.

Parker Williams was appointed without a pitch last summer.