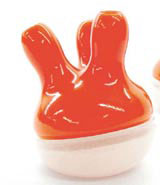 At a time when image is everything, polyvinyl chloride is a material in dire need of rebranding. First discovered in 1835, PVC – a white powder made from 57 per cent salt and 43 per cent oil – became one of the earliest plastics to be developed commercially. Rather than being celebrated for its versatility (the powder can be blended with lubricators, softeners, stabilisers and pigments to create a wide range of products), today PVC is considered tacky (commonly associated with dodgy fetish-wear) and environmentally dangerous, hardly putting it top of most designers’ wish lists.

Greenpeace is campaigning to show manufacturers and consumers that there are more positive alternatives to PVC, and as a result of political pressure, use of PVC is now strictly limited in parts of Germany and Scandinavia.

In 1995, the Swedish parliament voted to phase out both soft and rigid PVC: according to the then Swedish Minister for the Environment, Anna Lindh, ‘The question is not whether to phase out PVC, but how to phase it out.’ Also in the 1990s, rigid bottle manufacturers’ decided to switch to the arguably less harmful plastic polyethylene terephthalate, or PET, for packaging mineral water and soft drinks. Similarly, high profile brands such as Ikea and Lego are now virtually PVC-free, while Nike announced in 1998 that it had also begun a PVC phase out.

In the face of such opposition, the British Plastics Federation stands firm, refuting Greenpeace’s arguments as emotive and lacking in scientific rigour. According to the BPF,

where Green issues are concerned, PVC remains a grey area. In fact, when Greenpeace states that PVC’s high chlorine and additives content make it an ‘environmental poison’, the British Plastics Federation terms PVC a ‘life-saver’. It is precisely the material’s high chlorine content that gives it good fire retardant properties. As such, PVC remains the only material approved for conveyor belting, as well as being ideal for many construction applications. It is also the only material approved by the healthcare sector for blood bags, catheters and tubing for dialysis equipment.

Desperate to counter damaging environmental associations, many PVC manufacturers are now operating under a strict policy of voluntary regulation, setting themselves recycling targets and funding research programmes, including investing more than w3m into a pilot recycling plant in France.

Despite the ‘Greening’ improvements that the industry has made to the material, it still has a serious image problem with many designers. Faced with a minefield of conflicting information many feel the hype that surrounds PVC is so strong that they opt out of using it altogether.

When Ron Arad was experimenting with plastics for his successful Tom Vac chair, he chose polypropylene over PVC. Ultimately, a more limiting material, polypropylene can only achieve translucency, where PVC could be manufactured completely transparent. Although this could be considered a compromise, Arad is happy with his decision. ‘It’s considered a more ecological choice,’ he explains ‘so most people resort to using it instead – I guess it’s an exercise in damage limitation.’

Tom Dixon’s recently launched Fresh Fat range of furniture is made from Provista, a plastic with clarity and tensile strength similar to polycarbonate. ‘I avoid using PVC where possible,’ he admits. ‘There are some products for which it is unavoidable, such as shower curtains, but at Habitat we are currently phasing it out in temporary applications, such as packaging.’

Hoping to promote the material and lend it much needed glamour, the PVC industry is now appealing directly to designers to shake up its image. Ten leading PVC manufacturers have formed the European Council of Vinyl Manufacturers, which has developed the ‘PVC for Life and Living’ scheme, launched to encourage designers to experiment and create new products that reflect the material’s versatility.

The scheme kicked off in 1999, when ECVM sponsored a Design Nation seminar on materials. The following year, Julien Macdonald received ECVM sponsorship for his show at London Fashion Week, in return for which, their product’s profile shot up when Naomi Campbell modelled Macdonald’s PVC creations.

At Milan’s Furniture Fair in April 2001, Anna Citelli knitted witty lamp shades out of transparent PVC tubing, creating jumpers which she slipped directly over light bulbs. Later that year at London’s 100% Design show, contemporary designers Gitta Gschwendtner and Fiona Davidson presented a range of PVC domestic products, including a pleated vase that can be adjusted to the height of the flowers it contains and a fruit cushion that alters its shape according to its contents.

In November 2002, the scheme reached France, where designer Philippe Bellanger launched a prototype of the Chrysalides chair at the International Biennale Design Festival in Saint-Etienne. The chair is a sculptural piece of furniture that can be manipulated into six different sitting positions, ranging from a bar stool to a chaise longue, and can also be dismantled and stored in a small bag. The result of nine months of experimentation with PVC, the hammock-like chair is intended to demonstrate the flexible properties of the material. Currently being fine tuned to design out the prototype’s aluminium frame and replace it with PVC, the finished chair will be shown at this year’s Milan Furniture Fair.

Also in the pipeline for April’s high profile Italian Furniture Fair, eight European product and furniture designers, under the wing of Riccardo Giovanetti, will present their responses to the material. Given an open brief, they are simply required to design an object for any domestic interiors.

Meanwhile, later in the year, another promotional campaign is planned for Sweden, where a local designer will create an object out of recycled PVC to showcase the possibilities of the material.

According to UK designer Nick Crosbie, however, this tentative step towards a greener PVC – while laudable – may not be the answer. Crosbie’s company, Inflate, has become synonymous with PVC products and packaging, and he explains that although recycling solves the problem of waste, it has its own limitations. ‘You lose the softness of the material – once recycled, it can only be used for rigid applications. This makes it much less versatile and more expensive, plus the act of recycling in itself involves yet more processing, which in turn requires more energy consumption’.

While clearly concerned about the environmental impact of his material of choice, Crosbie remains pragmatic. ‘We try to encourage clients and factories to adopt an attitude that’s as environmentally friendly as possible, but ultimately we’re designers – we’re stuck in the middle of the manufacturers and the Green lobbyists,’ he says.

‘The bottom line is that sometimes there simply is no alternative to PVC, or sometimes the alternative is far too expensive to be viable. We did a packaging project for Boots the Chemists, and it wasn’t happy about using PVC, so we found an alternative, which was six times more expensive. The client decided it would be commercial suicide, and chose PVC.’

He describes the material as ‘simply the most versatile plastic’ and feels that the Green arguments, while critically important, often overshadow other aspects of the material that he loves to play with. Endlessly versatile, it can be rigid or soft; coloured, transparent, translucent or opaque; and is lightweight, durable and waterproof. ‘It can be extruded, vacuum moulded, dip moulded, injection moulded, inflated, blow moulded – it’s like a one-stop-shop in the plastics world, he says.’