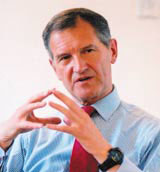 The former director-general of the Institute of Directors was appointed to the council last summer.

He is due to deliver his recommendations for the future contribution of design to the British economy to Chancellor Gordon Brown later this year, in the Cox Review.