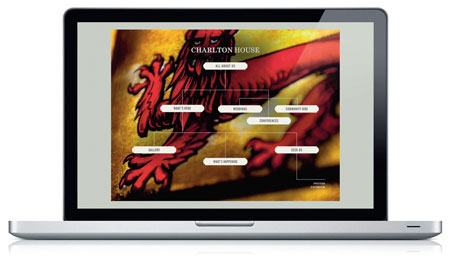 D Studio has designed a new website for Charlton House, a Jacobean mansion in Greenwich which is now used as a wedding and conference venue.

The group was approached to work on the website by Edward Schofield, who manages the venue, after D Studio was appointed last year to a separate project to create promotional brochures.

The group has also worked on signage and the branding of the venue’s tea rooms.

The brief, developed by both parties, was to create a website that promotes the best features of the Grade I-listed building and emphasises what makes it distinctive.

The website is navigated via a ’family tree’, which communicates the property’s history. Each section shows off a different part of the house, blending Jacobean detailing with a modern sense of humour.

D Studio co-founder Wes Anson says, ’We wanted to communicate that Charlton House is not only an impressive piece of architecture with well-preserved period features, but also, because of the way it is managed, it’s extremely down to earth and welcoming.’

He adds, ’This gave us the flexibility to give the brand a big personality and really show why it is very different from your typical period property.’
The new website launches today.