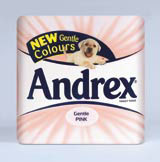 Kimberly-Clark is poised to relaunch its core range of Andrex toilet tissues, with a revised colour palette and fresh packaging designs developed by Big Idea.

The project has been two and a half years in the pipeline and is the first major relaunch of Andrex’s mainstream toilet tissue range in years. Kimberly-Clark’s intention is to update the range according to current and future interior design trends, to bring Andrex more in line with the contemporary look of UK bathrooms.

Andrex will replace its existing portfolio of six toilet tissue colours, with a revised flush of core colours based on more natural, softer hues. To reflect this, the packaging has also been redesigned to communicate a warmer and softer positioning.

‘Some 75 per cent of people have redecorated their bathrooms with accent colours and we have redesigned the Andrex range to reflect this’, says Carol Smith, brand manager at Andrex.

‘Consumers are very aesthetically minded – their bubble bath matches their towels, for example. There was a need to modernise the Andrex range with new colours and make the pack designs as consistent as possible with the product,’ she explains.

Big Idea analysed bathroom fashion trends to redefine the Andrex range. The consultancy was appointed a year ago to work on the project, but is not on Kimberly-Clark’s formal design roster.

‘The new scheme gets rid of the artificial, old fashioned colours and relaunches the brand with more natural, softer tones. This colour palette will be suitable for consumers and retailers,’ says Bill Wallsgrove, creative director of Big Idea.

Following a trial period, the products may be rolled out across international markets. Kimberly-Clark is believed to be launching up to four new colour variants next month.

The move to redesign Andrex’s core range of toilet tissues follows the unveiling of Andrex Quilts, a three-ply quilted toilet tissue, designed by Futurebrand, which launched last May.

Sales in the fourth quarter of 2005 rose by 2.8 per cent to $4bn (£2.3bn), according to Kimberly-Clark’s latest financial reports.